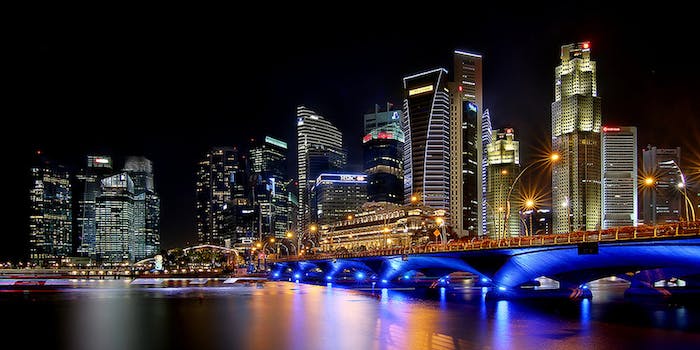 The country has banned "material [that] advocates homosexuality or lesbianism."

Singapore’s harsh new law regulating online publications isn’t just a threat to free speech—it’s also blatantly anti-gay, making it effectively illegal to talk online about anything involving homosexuality or those who practice it.

Back when this reporter’s father was in the Navy, you could get a crippling fine for spitting gum out on the street. A couple decades later, a foreigner there could (and did) receive a caning (a beating with a huge rattan staff) for, in essence, keying a car.

So it should be no surprise that the city-state’s press oversight authority, the Media Development Authority (MDA) has pushed through a draconian anti-free speech rule requiring any online publication with 50,000 or more discrete viewers per month to apply for a license and pay a “performance bond” of up to $63,000, according to Singaporean blog The Online Citizen.

This rule came into effect on June 1, despite the fact that Singapore’s constitution guarantees “freedom of speech, assembly and association.”

While the MDA’s new rules are onerous, they are not unprecedented. And while they are outrageous, they don’t seem laughable. Look at the fine print however, and they do—though the laughter might be a bit bitter depending on who’s doing the laughing.

According to the Gay Star News, a U.K.-based global gay news site, “The license will require the sites to comply with existing regulations that include banning ‘material [that] advocates homosexuality or lesbianism, or depicts or promotes incest, pedophilia, bestiality and necrophilia.’”

The practical effect of forcing the licensing of online publications (and even popular personal blogs) is to ban gays from talking about themselves and Singapore. Perhaps, like Iran, Singapore simply has no homosexuals. At any rate, they might not have them online if the regulations are enforced.

But Singapore’s government is notorious for its herky-jerky enforcement efforts.

Gay Singaporean writer and performance artist Ng Yi-sheng told Gay Star News, “Ultimately, gay activism won’t suffer that much, because a specific issue like this can be easily disseminated via blogs and Facebook walls. It’s the more general coverage of human rights abuses here that will suffer.”

And that might be the core reason for the rules. But suppression of dissent always results in collateral damage.