Kurt Metzger admitted on Facebook that he "criminally" choked his ex-girlfriend. Why does he have a job writing for Inside Amy Schumer?

Comedy Central’s latest girl wonder, Amy Schumer, just had her satirical comedy show Inside Amy Schumer renewed for a second season. The show has drawn praise for its awkward, frank humor and for positioning Schumer as the lone female in Comedy Central’s regular comedy roundup. The success comes with a dark cloud in the form of a staff writer, comedian Kurt Metzger, who allegedly harassed feminist bloggers online, stated in an interview that he was “pro-rape,” and claimed to have committed domestic violence himself by “criminally choking” an ex.

What will his employer do about it?

Lindy West and Sady Doyle, two outspoken critics of rape humor in comedy, are accusing Metzger of an online harassment campaign that started more than a month ago. Doyle is taking the evidence straight to Amy Schumer and Comedy Central.

Doyle and West both drew Metzger’s attention after they voiced their opinions on the ongoing debate about rape jokes within the comic community—a persistent issue since last year’s Daniel Tosh controversy.

The bloggers claim Metzger is targeting them and other feminists by making impersonator accounts on various social media platforms and filling them with obscene Photoshops of the women he’s mocking.

In May, West debated the issue with comic Jim Norton on FX’s Totally Biased. Afterward, the flood of hate mail she received inspired an essay and video recording called “If Comedy Has No Lady Problem, Why Am I Getting So Many Death Threats?”

Among the blowback from the Biased appearance, said West, was a barrage of comments from Kurt Metzger. 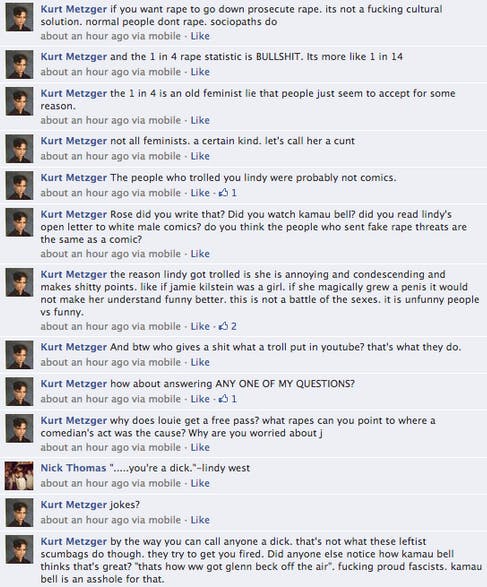 Doyle, who, like West, spoke to the Daily Dot over email, drew Metzger’s attention after an essay she wrote in May about her uncomfortable reaction to comic Sam Morril’s standup routine. It featured multiple rape jokes, including one gag about having sex with his unconscious girlfriend.

It wasn’t just the occasional rape joke, or the occasional self-congratulation for telling the rape joke, that made the set so exhausting. It was just the steady, relentless, predictable drone of a man whose only punchline was some variation on “I do not like women.”

Doyle said Metzger had criticized her reaction to the routine in Facebook posts that are no longer public. In a lengthy interview with comedy blog Splitsider, Metzger spoke out against feminist critics of comedy, arguing that “[t]he only valid criticism of a joke is that it’s not funny.” He mentioned Doyle’s essay on Morril, but the published version never mentioned Doyle’s name. Doyle then reached out to the author, Phil Davidson, flagging Metzger in the process.

According to a transcript she shared with the Daily Dot, Doyle attempted to engage Metzger in a dialogue about his comments via Facebook’s private messaging feature. Doyle asked Metzger to read a study showing that exposure to sexist humor makes men more likely to commit rape. Metzger dismissed the academics as knowing nothing about comedy.

“[A] study on jokes by people who aren’t funny is inherently bullshit,” he told her. He also scoffed at the idea that rape jokes increase the proclivity to commit rape, comparing it to the claim that video games increase the potential to commit violent crime.

As far as if Im hilarious. I don’t know. But I’ve already been validated by ALLLLLLLLL the comics you think are good so it’s too late to make me feel differently now. But maybe louie [sic] and attell and giraldo and ganeane [sic] and sarah and dave chappelle and marc maron and etc are wrong and you’re right Im not funny.

Following the attention from Metzger, both women saw imposter accounts pop up on Facebook and Twitter. West had her own Facebook account briefly deleted along with the actual sockpuppet account. “[The imposter] mostly talked about how much I hate rape and love donuts,” she said.

@SallyStrange He’s been setting up fake social media accounts for me & Lindy West. This is apparently something he does to folks often.

In most cases, each sockpuppet account messaged or referenced Metzger shortly after it was made. But Metzger, who describes himself as “a pro gay feminist who loves all races,” has denied the accusations of harassment.

@sadydoyle @pddavidson no im not. i don’t have time for that.

Although the Daily Dot could not reach Metzger for comment, he appeared to spend most of Friday derisively responding to Doyle’s attempts to alert Schumer to his behavior.

Attempts to reach representatives for Metzger, Schumer, and Comedy Central to verify Metzger’s claims went unanswered. We couldn’t confirm the authenticity of the deleted screengrabs or that the Facebook rant about choking his ex-girlfriend is true, nor could we verify his raise. But Metzger’s continued comments might well raise some eyebrows at his employer’s HQ. On Friday, he told Official Comedy Standup in an interview that women who protested against rape jokes were “selfish,” pointing out that “everybody gets raped”:

Isn’t it so selfish? Rape—’cause that—that really becomes, like a—you have to fight a feminist with that shit. Which is insane, because rape—everybody gets raped… And men—literally can’t talk about them. If you get raped as a man, not only is it hilarious… right? … You know how they say “rape culture,” how that’s like a thing here? We don’t have that here… If you think that, you’re such a fucking privileged asshole, to think you live in America and there’s a rape culture. You piece of shit. You’ll probably never be raped here, you animal.

Metzger went on to disparage the “commies” involved in critiquing comedy:

Without any apparent irony, Metzger claimed to “know a lot of rape victims,” and insisted that “no one I know that was victimized has any problem with any joke they’ve ever heard. … A lot of them … would like to be treated like they weren’t raped.” He also suggested that there’s nothing particularly unique about sexual assault as opposed to any other kind of assault, claiming that “shame” doesn’t come “from the actual [rape]—that’s like, what we put on it, on top of it.”

Doyle and others screencapped a now-deleted Facebook post from last month. In it, Metzger apparently confesses to “choking” an ex-girlfriend because she “was insane” and “who the fuck thinks they can smash my shit with a hammer???” In the same thread, he admits that he shouldn’t have committed the assault, but he rationalizes his actions by asserting that she should have been more afraid of him:

fuck you bitch. you clearly don’t have a fear you should have.

@sadydoyle Sorry, I deleted the photo. Trying to back away from this psycho. But here is is for the record. pic.twitter.com/NELxKnFLPr 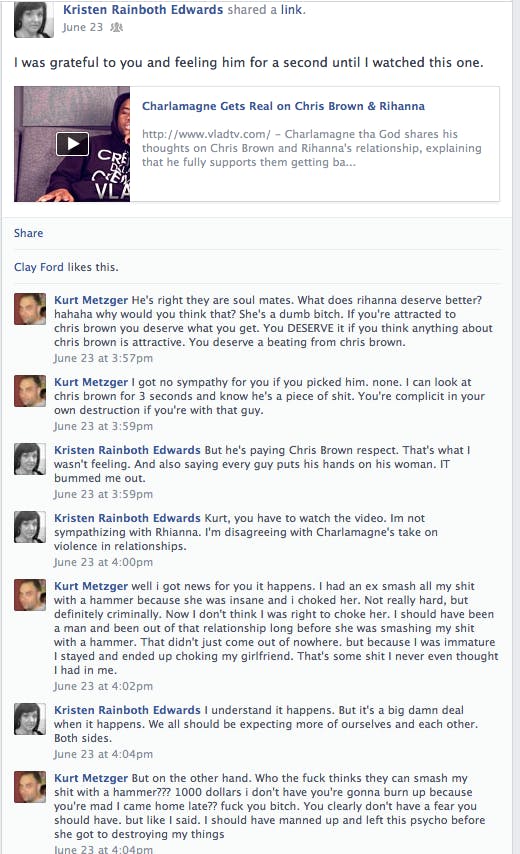 Doyle told the Daily Dot that this admission, even more than Metzger’s hostile behavior towards feminists who disagree with him, was the real story:

This started out as a guy getting angry and hostile in the name of defending what he claimed were “just words,” “just jokes,” words that—he was adamant—had no relationship to any real-life violence, no matter how hateful or bigoted they were. (It’s why he’s been comfortable defending acts of racism and homophobia on his site, and using racist, homophobic and misogynist slurs—because they’re “just words.”). … The words were never “just words.” The jokes were never “just jokes.” The violence, in his case, was very real.

Ultimately, West said, whether Metzger is behind the imposter journals or not isn’t important:

The point is that this is how this slice of the comedy community treats women who speak out about misogyny. This is the kind of abuse and harassment they think we deserve for suggesting (respectfully, by the way—I have never harassed anyone) that women be treated with basic respect. … It’s a gendered thing. It’s the consequence for women if we complain, especially about things that might be invisible to a lot of men.

@Alex_Edelman Fuck nice, and fuck your respected fucking member of your fucking community that talked about raping me & drew dicks on me.

Even if the true creator of the sockpuppet account is never exposed, the level of Metzger’s vitriol may give a boost to feminism’s argument within the comedy community. While Metzger argued on Facebook, “Don’t worry about jokes. Rapists don’t hide behind rape jokes,” the domestic violence in his past—not to mention the threats in his current language—illustrate in a grim way the very real connection between “jokes” and actual assault. Ironically, Metzger is a textbook example of the academic study he mocked and dismissed—the one that explored how men who enjoy jokes about sexual violence are more likely to commit sexual violence. Metzger’s admissions, truthful or not, are horrifying enough: He stated that some women “deserve a beating,” then he copped to choking his girlfriend because she didn’t “fear” him enough.

Metzger’s wide and growing audience gives him the power to influence more men like him. Ultimately and unfortunately, Metzger’s actions might end up delivering a wake-up call to the comedy community about the consequences of their words more effectively than any blogger could do on her own.