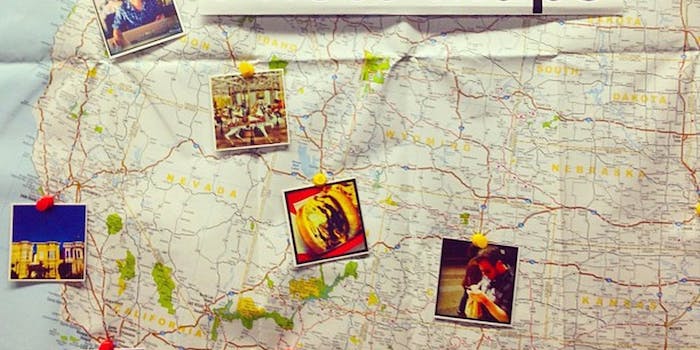 A new feature lets Instagram users see their photo locations on a map, but some users are worried about the privacy implications.

Instagram unleashed a new-look version of its iPhone and Android apps Thursday, to make browsing through photos easier. However, concerns over privacy have rippled through the photo sharing community.

On the surface, the Photo Maps feature (in which one’s geotagged photos are visualized on a map) is a lovely way to browse through someone’s photos and discover shared images that might have been forgotten amid Instagram’s real-time stream.

In a post announcing the new apps, the Instagram team made it abundantly clear that before you add your photos to your personal map, you’ll be asked to review all the photos you’ve appended your location to in the past. If you missed any you did not want to show the world (such as one that reveals your home address), you can remove the geo-location data so it won’t appear on the map.

But despite Instagram giving users complete control over what appears on their maps, some are considering the privacy concerns the feature brings.

“Love the update except the photo maps thingy.. Privacy needs to be improved,” wrote @ananq on Instagram’s announcement post.

“Don’t mind the update except one thing – I don’t like the potential lack of privacy with the maps and geotagging,” commented @mixedgems on a photo posted by Joe Mio, founder of Instagram web viewer site Webstagram. “Glad I’ve never geotagged.”

Previously, the only information that was displayed about geotagged photos on Instagram was a line of text indicating where the photo had been taken, but third-party apps like Gramfeed offer the option to see some photos on a map view.

Despite the concerns, Mio told the Daily Dot he thought “more users will start using geo-tagging.” Though he doesn’t believe the new version will cause a sepia-tinged sea change in how he uses Instagram, he is likely to visit more places and use the geotagging feature more often “because I can see the map.”

Philippe González, founder of the Instagramers blog and community, told the Daily Dot that people will always complain when there are changes, and that nothing has really changed as far as privacy goes.

The [geo-location] info was already in the app before this new version. And I think the communication by Instagram (do you want or not want your photos to appear in the map of pics?) was clear and fair. Some people wondered how to go tag old pics that were not tagged, but that’s obviously not possible. Geo location depends on the data that the app keeps exactly when and where you upload the pic.

Both Mio and González said they’d heard numerous reports of the new app not working properly for IGers, with the app crashing and not uploading photos properly, but González pointed out that this was a normal occurrence when a new version is released and IGers rush to try it out.

They were divided on the issue of displaying three, rather than four, photos on each row in the grid view on profiles and in the Explore tab. González claimed this “allows you to have the best quality of pic preview,” but Mio wasn’t a fan, preferring the previous version of viewing photos. Other IGers had complaints about the new-look profiles.

“I don’t really like the look of our profiles now though. Liked the dark colors,” commented @alirb97, while @cree8tor had mixed feelings: “Love how faster it got and the infinite scrolling, but totally hating the new profile layout/:”

There’s another source of annoyance for IGers, as their friends race to post their photo maps. That’s led to a flood of notifications (for each person who adds photos to their map), drowning out Instagram’s regular follow, like, and comment notifications.

Perhaps the most significant update from a community perspective is the ability to report IGers for spam based on a specific comment. While IGers have been able to delete comments by others from photos in the past, they can now report individual comments for abuse, rather than having to report the user responsible for them. Flagging a user has been simplified to a single action: the Report for Spam option.

“It’s easier for Instagram to detect problems and then for users to feel they must behave,” said González. Mio thought the more detailed abuse report option was a “great thing.”

Meanwhile, if you’re wondering why the maps use Google Maps rather than those from Bing (a partner of Instagram’s soon-to-be owner Facebook), there’s a simple answer: Instagram uses Foursquare for its geotagging feature, and Foursquare taps into Google Maps.