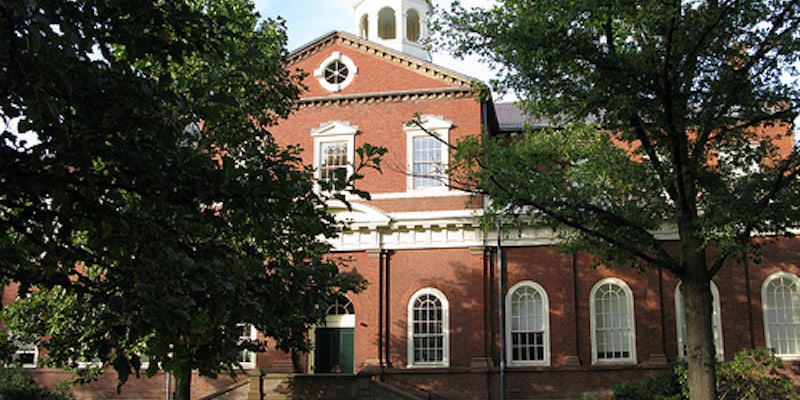 The university sought to uncover who leaked an email to the media related to last spring's cheating scandal.

For a school whose motto translates to “truth,” Harvard University hasn’t been entirely forthcoming with its staff or students.

On Saturday evening, The Boston Globe reported that university officials had secretly searched the work emails of 16 resident deans in connection with a huge cheating scandal that took place during the Spring 2012 semester.

The clandestine investigation was launched nearly six months ago after several confidential emails that discussed how the administration planned to discipline the students accused of cheating were leaked to the media.

One email in particular, written by Associate Dean of Harvard College John “Jay” Ellison and dated Aug. 16, 2012, suggests that athletes thought of cheating should consider taking a leave of absence so as to maintain NCAA eligibility. The leaked communique drew criticism from the Boston-based NPR station WBUR for allegedly showing preferential treatment to student-athletes.

On Monday, Harvard University officials put out a press release confirming the Boston Globe‘s report. The prepared statement acknowledged the secretive email scan, but claimed that they didn’t actually read anyone’s emails. The search, conducted by the university’s IT department, only looked specific subject lines and it only looked at the administrative accounts of the 16 deans, not their personal Harvard accounts.

Curiously, the school justified their actions by claiming that they did their secretive investigation in order to protect the privacy of its students.

“[In] every instance the actions and decisions in this case were motivated by the goals of protecting the integrity of our faculty-legislated processes and the privacy of our students,” the statement read.

“We hope the fuller account of the actions in this instance make abundantly clear how high a bar we have, and will always have, for any review of email (or, in this case, even email metadata) and how carefully we construct searches when the need in situations such as this does arise, which is extremely rare.”

But the school’s defense of their actions has not appeased Harvard staff.

“I think what the administration did was creepy,” sociology professor Mary C. Waters told the New York Times. “This action violates the trust I once had that Harvard would never do such a thing.”

Other academics at the Ivy League school were harsher in their criticism.

“Whoever designed this entire cheating scandal in all of its many investigative aspect fits better at the Hoover era FBI than at a modern university,” Theda R. Skocpol, government professor and former dean of the Graduate School of Arts and Sciences, wrote in an email to the Harvard Crimson.

As for the controversial investigation, it did result in finding the culprit, though as The Boston Globe notes, that resident dean was not punished.