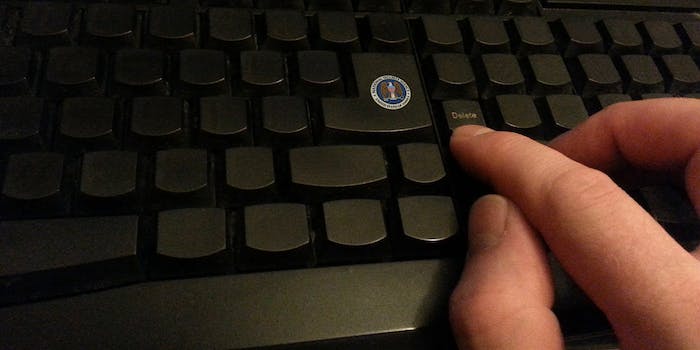 This man offered to ask the NSA to delete anyone's PRISM records. The only problem: The court that runs PRISM has no address.

On the website, My NSA Records, Corbett offers users two types of recourse: On their behalf, he will either file a Freedom of Information Act (FOIA) request for their records or a motion to quash the records with the Foreign Intelligence Surveillance Court (FISC)—which would theoretically prevent the NSA from accessing them.

In the first 24 hours after launching the site on June 14, Corbett mailed out more than 500 FOIA requests. But for the four dozen users for whom he was filing quash motions, the process was more complicated than he expected. At the post office, he discovered that the FISC doesn’t provide any place to send motions.

“It was a shock,” he told the Daily Dot. “Instead of an address you have to call a phone number. I had never heard of that before.”

Indeed, Title IV Rule 7(k) of the FISC’s Rules and Procedures reads, “a party may obtain instructions for making submissions permitted under the Act and these Rules by contacting the Clerk at (202) 357-6250.”

When Corbett called the number, he was eventually put in touch with the Department of Justice.

“The court is essentially asking me to go to the opposing party to file an action against it,” he said.

The Justice Department did give him an address, which he said he will publish online in the coming days.

Of course, having to call a phone number to obtain the filing address is only a minor inconvenience. But it appears to indicate that the court was not created with the intention of interacting with the American public. “The problem with the FISC is that secrecy is the default,” Corbett said. “There shouldn’t be a court that decides every three months for Americans to have their phones tapped.”

“Domestic surveillance has to be a tool used narrowly.” Corbett added. “Or eventually this power will be abused.”