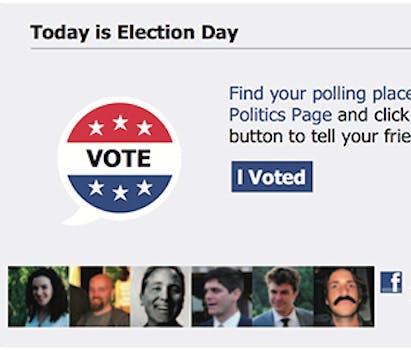 A study found that the election day 2010 message, which used photos of users' friends to help it go viral, resulted in hundreds of thousands of people going to the polls.

A study by scholars at the University of California, San Diego, shows that a single, well-placed message on Facebook can result in 60,000 votes being cast.

As with all statistics-based studies, this one is easy to oversimplify, but it does indicate that a properly written message to social media users—combined with a social element like photos of the users’ friends— has the potential to increase voter turnout.

The study, authored by James Fowler, professor of political science at UCSD’s Division of Social Sciences and of medical genetics in the School of Medicine, was published in the latest issue of prestigious scientific journal Nature.

The study examined a “social, non-partisan ‘get out the vote’ message” posted on the Facebook pages of 60 million users on Nov. 2, 2010, which those using Facebook at the time may remember for its prominent “I Voted” button.

According to the UCSD press release, the message consisted of the ubiquitous button, a link to local polling places, a counter showing the number of Facebook users who had already voted, and the profile photos of as many as six friends who had already clicked “I’m voting.”

About one percent of these users were randomly selected to receive an alternate “informational message” that left out the pictures of friends, while another 600,000 users were selected as a control group and received no message at all.

After election day, researchers compared how many of the targeted Facebook users in each group clicked that they had voted, and delved into voting records to see how closely the claims of voting matched the actual voting.

Results indicated that 4% of those who had claimed to have voted had not. But they also showed that those who saw the social message had a higher voting rate than those who received the informational message or no message at all. In fact, the version of the message without friends’ photos appeared to have no effect whatsoever on Facebook users’ decisions.

UCSD maintains that the social element to the vote/don’t vote action had a much more widespread result when mapped against the users’ social graphs.

Although the direct effect on users who saw the message only generated 60,000 votes, another 280,000 users voted because their friends shared the message. In other words, Fowler said, “the social network yielded an additional four voters for every one voter that was directly mobilized.”

The researchers further discovered that the likelihood of a user voting grew as the voting friend or friends were closer to the user. A user’s best friend voting was more important than, say, that one gal on his softball team, or the gentleman in her book club.

Regardless of the exact numbers, the study does seem to prove that being reminded to vote is not the deciding factor. Instead, it is the social connection that flips the switch. Peer pressure, perhaps. But perhaps it is also the reality that voting is, at its foundation, an expression of individual political will within the context of societal needs and pressures.

“Think globally, act locally” may in fact be more than just a bumper sticker. It may be the grammar of our civic engagement.