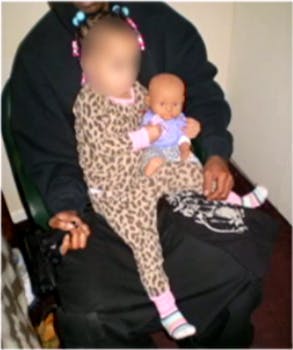 Facebook photo of dad with baby and gun leads to arrest

It's the classic "Hey, look, everyone, I own a gun and I've got a baby" photograph that's popular among fathers pretty much nowhere. And now it's gotten Dominic Gaines arrested.

Cincinnati dad Dominic Gaines sat holding a gun in one hand and his 1-year-old baby in the other. Then his brother snapped a pic and Gaines uploaded it to Facebook. It was the classic “Hey, look, everyone, I own a gun and I’ve got a baby” photograph that’s popular among fathers pretty much nowhere. And now it’s gotten Gaines arrested.

Police charged the 22-year-old with endangering a child. His mother-in-law had seen the photograph and apparently didn’t like the implications. She called up the cops, and now Gaines is sitting behind bars at the Hamilton County jail.

Police later found that the weapon was actually a BB gun, but that hasn’t changed the minds of Cincinnati’s finest.

“It’s really been blown out of proportion,” Gaines’s father, who speaks only in puns, told Cincinnati’s Fox 19.

Gaines’s attorney echoed those sentiments. He claimed the baby was never in any danger. “What had happened was he had his nephews over, as well as his daughter, they were all playing,” Andy Schoenling told Cincinnati’s News 5.

“He was playing with a BB gun with his nephews. His brother walked in and wanted to take a picture of him with his daughter, he incidentally happened to be holding the BB gun in the picture.”

The harrowing tale provides a couple serious life lessons for other gun-happy dads across the world: Don’t pose with your gun and your baby. And don’t friend your mother-in-law on Facebook.