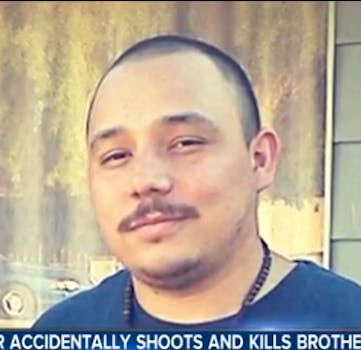 A teenage girl in Arizona accidentally killed her brother after the pair were posing with a loaded gun and taking pictures of each other while uploading them to Facebook.

Those gratuitous self-shots you love posting to Facebook could be deadly.

A teenage girl in Arizona accidentally killed her brother after the pair were posing with a loaded gun and taking pictures of each other while uploading them to Facebook. Manuel Ortiz, 22 (pictured), died instantly early New Year’s Day after Savannah Ramirez, his 19-year-old sister, mistakenly discharged the pistol.

Police say the brother and sister had been drinking when they returned home after celebrating New Year’s. Three others were present in the west Phoenix apartment, but just one person witnessed it, reports KNXV-TV. It’s not known if Ramirez knew if the gun was loaded.

On Ramirez’s Facebook page, she indiciates she’s employed by Amazon.com as a “picker/packer.” She is also seen posing with various gang symbols in her photos.

Friends described Ortiz as caring and funny. “Every time he saw somebody sad or down he would be right there making jokes so you could be happy,” an unidentified friend told the ABC affiliate.

Ramirez was questioned by the police and released, but she could still face manslaughter charges if her system contained alcohol. Her toxicology results could take up to six weeks to return before the police decide if she will be charged.