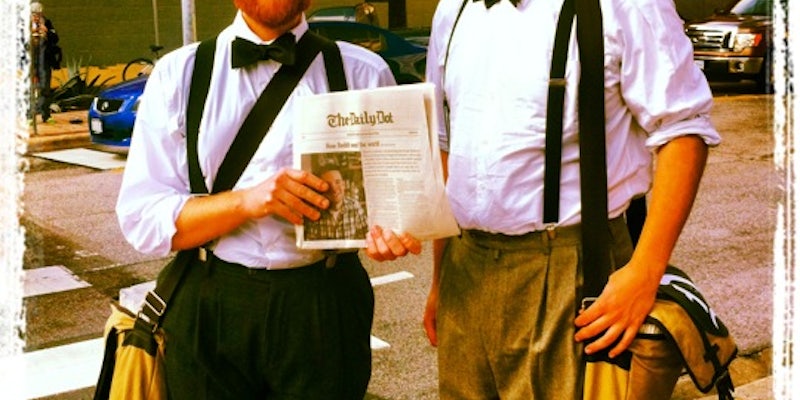 The Daily Dot’s guide to South by Southwest Interactive

Here are the highlights from our commemorative print edition.

That’s one of several headlines the paperboys were yelling on behalf of the Daily Dot in downtown Austin on Sunday.

For the annual South by Southwest Interactive conference (March 9–13), we printed a special commemorative edition previewing the panels and events of interest to the communities we love. The 16-page guide also curated some of our finest work to date. Look for it near the Austin Convention Center.

But for those following along at home, we’ve gathered all of the new content below. And there’s still plenty more to come.

Nick Denton comments on comments
Too often, the drama-filled discussion sections of website fall from tragedy to farce. The founder of Gawker Media thinks he has the fix.

The history of South By Southwest Interactive
A year-by-year glance at the good, the bad, and the awesome from the annual tech conference.

Vic Gundotra defends Google’s “social layer” at SXSW Interactive
Google+ is doing fine, says the executive in charge of it. Is he spreading it a little thick?

Ben Huh: the boss of meme culture
The CEO of Cheezburger Network wants to move on from lolcats to change the way we consume breaking news.

Sohaib Athar and the rise of Twitter’s citizen journalist
The tweet heard around the world.

Watching seafood and the future of social food
How technology and food can work together to make the world a better place.

How to prepare for the Digital Beyond
What will happen to your online identity when you die? That depends entirely on the actions you take now.

The relationship between TV and Twitter—it’s complicated
An analysis of how tweets are translating into television ratings.

As politics move online, the medium is no longer the message
Activist Micah Sifry says it’s time to stop marveling that political candidates are joining Web communities. Let’s see what they have to say!

To infinity and beyond: NASA tweetups bring fans along for the ride
Remember Space Camp? There’s a new, age-appropriate way to hang out with astronauts.

The demystification of “Black Twitter”
When it comes to trending topics on Twitter, some things really are black and white.

How Helen Klein Ross brings @BettyDraper to life
In a vivacious form of social storytelling, advertiser Helen Klein Ross has recast the Mad Men series on Twitter, with a strong supporting cast.