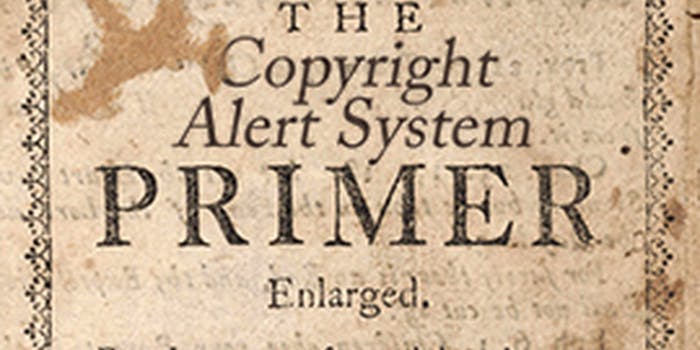 Your guide to life under the Copyright Alerts System

The Copyright Alerts System—a.k.a. "Six Strikes"—is about to crack down on Internet piracy in the U.S. Here's how will it affect you.

The Copyright Alerts System (CAS) is set to go live soon. If you’re an executive at a major content company like Fox or Universal, you might consider this good news.

For everyone else, well, it’s complicated. The CAS has been in the works for years now—you may have heard it mentioned under other names, like the “Six Strikes” system—so it can be kind of a mess to make sense of it now that it’s about to take effect.

We’ve put together a quick guide to give you a sense of the new state of the Internet in the U.S.

What is the CAS?

It’s an agreement between the five largest Internet service providers (ISPs) in the country and major content companies, such as music studios and record labels. It aims to cut down on illegal filesharing.

Does it directly affect me?

If you use AT&T, Cablevision, Comcast, Time Warner, or Verizon to get online at home, then yes. It’s either now part of your terms of service or it’s about to be.

It’s an automated “graduated response” system, meaning it slowly ramps up your punishments each time it thinks you’re pirating files. The first two times, you just receive an email and a voicemail saying you’ve been caught. The third and fourth times, you’re redirected to some “educational” material, and you’ll have to click that you understood it. The fifth and sixth times, it gets serious: Your Internet connection can be slowed to a crawl for a few days.

Then, well, you’ve “graduated” from the system. No more alerts. Congrats! The CAS won’t hamper you any more. Except the content companies might now try to sue you as a serial pirate. And the fact that you’ve been cited six times already for copyright infringement will likely be used in court against you.

This point is still up for consideration. Technically, companies that want to protect their copyrights aren’t prohibited from suing you just because you haven’t been flagged six times yet. However, several experts consulted by the Daily Dot deemed that kind of lawsuit unlikely. Also undetermined but unlikely: whether the fact that someone’s been flagged multiple times by the CAS can be used as evidence in court that they’re repeat infringers.

How does it identify infringers?

It’s quite specific: The CAS will take content that people might be pirating, like a blockbuster movie or popular album, and looks for computers that are uploading it using peer-to-peer filesharing software like BitTorrent. That person’s IP address is visible, and his or her ISP knows which account is associated with that address.

That’s it? It seems like it’d be easy to get around it.

It is, through tricks like doing all your downloading from an open wireless network or disguising your IP address with software. However, both of those solutions carry their own unintended consequences.

I pay the bill for my Internet connection. What if I don’t pirate, but my family or neighbor does on my account?

The CAS considers you responsible. And that’s the point: It’s designed by content owners to promote a culture of people taking responsibility for casual piracy.

Is this a new law?

Nope. This whole operation is a private agreement, created and controlled by the corporations involved.

So the CAS says I’m guilty of infringement, but I know I’m innocent. Can I clear my name?

You can. It costs $35 to plead your case before the American Arbitration Association. If you win, you get your $35 back.

If I’m flagged, am I in trouble?

No, but don’t ignore it. It means that activity on your Internet account is telling the CAS that you’re pirating content, or that the CAS itself is falsely flagging you. Either way, it should warrant your attention.

Wait, the CAS can falsely flag me?

We don’t know for sure until it’s deployed, but there’s reason to be concerned that the CAS isn’t perfect. The creators of the CAS software, MarkMonitor, got some egg on their face recently when they sent a stern, automated letter to Google that essentially said “stop linking to this site, because it streams HBO’s copyrighted content!” The site? HBO.com.

Plus, there was a scandal in October when news came out that the independent consultant hired to make sure MarkMonitor was doing a fair job had spent years as a lobbyist for a music industry group, the Record Industry Association of America (RIAA), which helped found the CAS. The woman in charge of the CAS’s implementation, Jill Lesser, said she hadn’t been aware of the connection and promised to hire a second consultant for the sake of transparency. That still hasn’t happened.

I don’t pirate files, so why should I care?

First, the possibility that you’ll be falsely flagged. People certainly do get sued for copyright infringement they never committed; just Google the phrase “copyright troll.”

Second, this is bad, possibly devastating news for the Open Wireless Movement, which encourages people to keep their Wi-Fi open to neighbors and passersby as a public service. But as you now, the CAS wants to stress that anyone who pays for a connection is responsible for what happens on it.

Third, while the folks behind the CAS say it’s purely an “educational” system, your fifth and sixth strikes will slow your connection speed to a crawl for several days. Some folks find that an unfair punishment, especially considering it’s designed to happen to paying customers who haven’t been to any kind of trial.

Can the CAS shut off my Internet connection entirely?

Shutting down a user’s Internet access isn’t part of the CAS. Although it’s within an Internet service provider’s power to cancel your account, these companies don’t have much incentive to disconnect their paying customers.  However, they also don’t have any obligation to protect you from lawsuits. Whether your ISP decides to help copyright holders connect your name with your IP address is up to the company’s discretion.

Is this going to kill the Wi-Fi at my local coffee shop?

It shouldn’t. The CAS only applies to residential accounts; any business that provides open Wi-Fi is supposed to have a higher class of service.

That doesn’t sound fair. How do I opt out?

You can’t. You can switch to a smaller ISP—if there’s one available in your area—but that’s about your only option.