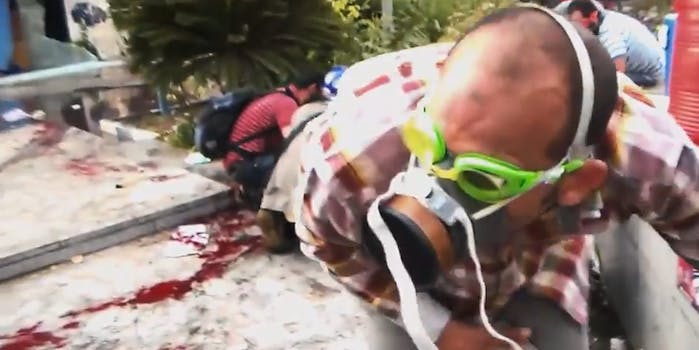 A shocking street view of Cairo’s Day of Rage

This 10-minute video captures the catastrophic violence that has overtaken Egypt.

Tanks roll through the streets, gunshots ring out, and bodies lie strewn everywhere you look. Blood spatters the sidewalks as men in oxygen masks and helmets throw grenades and then huddle together for protection.

No, it’s not the latest installment of Halo or Grand Theft Auto: It’s what happened on the streets of Cairo Wednesday during demonstrations by citizens over the military ousting of Egypt’s first democratically elected president in July.

The footage, which lasts nearly 10 minutes, is a remarkable street view of the catastrophic violence that has overtaken Egypt since former President Mohamed Morsi stepped down under pressure from the Egyptian military. Morsi’s single year as leader was beset with political blunders and the disastrous shoehorning of a strongly Islamic-centric constitution over the objections of many secular and nonradical political leaders.

In July, protesters fed up with Morsi’s presidency took to the streets to demand his resignation. But now, many of the millions of Egyptians who took to the streets last year to elect Morsi in the largest democratic protest in history are fighting back against the military’s undemocratic assumption of rule.

On Wednesday, the demonstrations turned ugly as hundreds of protesters were gunned down in cities across the country. In Cairo, the video shows smoke hanging in the air, fires on the ground, and citizens apparently dropping like flies against a constant backdrop of shrieking car alarms and steady gunfire. At one point the cameraman appears to be running for his life along with the mob around him.

“This video depicts the martyrs in the streets,” states the video’s summary, uploaded yesterday by YouTube user DrAbdallahSaid, who has edited a variety of Arabic footage on the site and may be the man behind the camera.

Since yesterday, the video has been viewed over 200,000 times. Today, in what citizen protesters are calling a “Friday of Anger,” at least nine protesters have been killed.