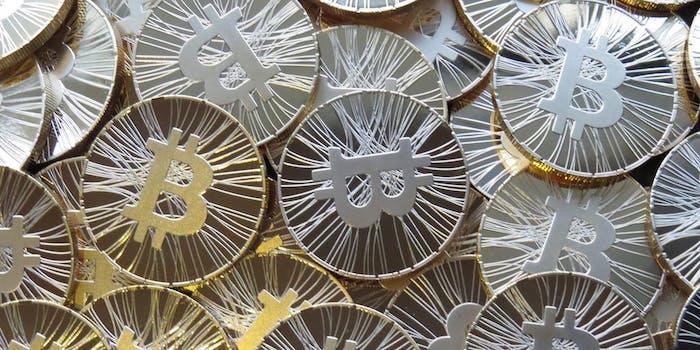 Bullish investors predict the digital currency's market cap will grow by $1 billion in just a month.

At a $400 exchange rate and a $4.6 billion market cap, Bitcoin is booming. More skeptics, cheerleaders, and curious potential investors are talking about it than ever before.

As the world wonders why it’s doing so well, the peer-to-peer currency is on pace to hit two major milestones in the near future.

Bitcoin’s market cap, which is more than double what it was just three weeks ago, is on pace to hit $5 billion around the time bitcoins hit $417, based on the current bitcoin count. As time passes and more bitcoins are mined, that magic number will go down.

Earlier this month, the cryptocurrency sprinted past its previous all-time high exchange rate of $266. Referred to lovingly and derisively as “magic Internet money,” it’s now sitting at a $400 average across all major exchanges.

The price of bitcoins has doubled in the past month. Will it be able to climb all the way to $500?

Many investors believe so. If that sounds like delirious optimism, consider that at Bitcoin’s current pace, it will hit $500 across all major exchanges by the end of November. That will mean a $6 billion market value, a full $1 billion gain in about two weeks’ time.

If you’re waiting for a plateau, others just see more climbing in the future. In Germany, a party is being planned in Frankfurt for the day bitcoin hits $1,000. In a recent interview on CNBC, Cameron and Tyler Winklevoss said the currency could be worth 100 times as much as it is right now.

Responding later on the same channel, CEO of Euro Pacific and gold investor Peter Schiff said that the current Bitcoin boom seemed less like “gold 2.0” and more like “tulip mania 2.0,” referring to a massive and absurd boom in Dutch Tulip prices in 1630s that is considered the archetype of speculative bubbles that inevitably come crashing down.

No one but the most Pollyanna-ish Bitcoiner denies that the famously volatile currency will see its down days just as it has seen many ups lately. Even Bitcoin Magazine calls the latest boom a bubble in a sober and insightful look at the numbers behind the climb.

But all previous Bitcoin crashes led to recoveries. Moreover, this market has more mature investors who know how to ride out turbulence better than ever before. They’ve been through crashes. With confidence in the currency rising, it’s common to hear investors doling out advice on staying steady even when things inevitably get tough.

Like the Winklevoss twins and other high profile Silicon Valley investors, many Bitcoiners say they’re in it for the long term. It’ll be fascinating to see how they perform when put under the pressure of a crash. But as the current boom shows no signs of slowing, it seems that test won’t be coming anytime soon.