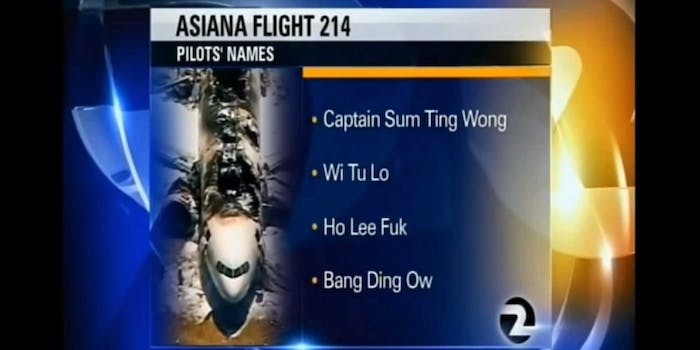 The station listed pilots for the airline as "Sum Ting Wong" and "Ho Lee Fuk."

KTVU eventually issued an apology—and then temporarily took it down—blaming the error on the National Transportation Safety Board (the NTSB confirmed that an intern had mistakenly confirmed the prank names). By that point, however, footage of the gaffe had already made its way to YouTube, where it quickly went viral.

On Monday, the Associated Press reported that Asiana Airlines was going to sue KTVU for damaging their reputation.

The decision by the South Korean company to pursue legal action stemmed from their desire to “strongly respond to [KTVU’s] racially discriminatory report,” spokesperson Lee Hyomin told the AP.

As of this writing, Asiana Airlines has not disclosed what damages it will seek.