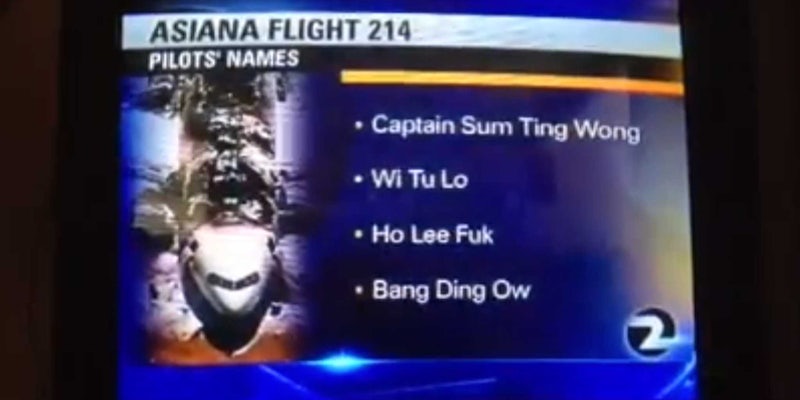 Bay Area television station KTVU thought they were breaking news when they published the supposed names of the four pilots behind Asiana flight 214, the plane that crashed at San Francisco International Airport on July 6. Instead, the Fox affiliate ended up throwing away its journalistic credibility and becoming the laughing stock of the Internet.

During the noon broadcast, KTVU claimed that the pilots in charge of the Boeing 777 were Captain Sum Ting Wong (something wrong), Wi Tu Lo (we too low), Ho Lee Fuk (holy fuck), and Bang Ding Ow (bang ding ow). Anchor Tori Campbell read these out loud, apparently not aware that it was a racist joke that somehow made it on air. Inevitably, the gaffe landed on YouTube.

The producers realized it too late.

Instead of admitting that they’d been had, KTVU issued a statement apologizing for the error while blaming an official at the National Transportation Safety Board—the government agency in charge—for confirming the names.

“Earlier in the newscast we gave some names of pilots involved in the Asiana Airlines Crash,” the statement read. “These names were not accurate despite an NTSB official in Washington confirming them late this morning. We apologize for this error.”

“I don’t know who [KTVU] got that from, but we do not release names,” Knudson told the blog.

The gaffe comes just days after the station ran an article congratulating itself on “being 100% accurate, effectively using our great sources and social media without putting a single piece of erroneous information on our air.” 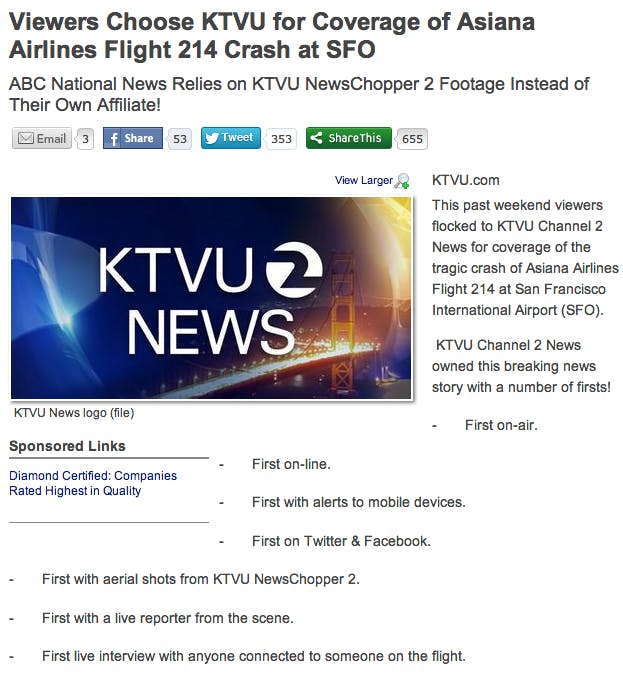 The original apology has since been removed from the KTVU website, most likely because of the false assertions. Fortunately, the bulk of the apology was screengrabbed by Matthew Keys, former social media editor for Reuters, and published on Twitter.

“Unfuckingbelievable!” said a newsroom staff member at a rival station. “They have been airing a tasteless promo about how they were first with everything. Add first in stupidity.”

The staff member, who did not want to be identified, said KTVU’s gaffe was the latest in a string of incidents by an organization once heralded as the ultimate news authority in the Bay Area.

“Serves them right for beating their chest about being the first station to report a tragic story where people died,” the staffer said. “They’re a laughing stock. A once proud outlet that’s, sadly, lost its way.”

Meanwhile, viewers have taken to KTVU’s Facebook page to ridicule and condemn the station. 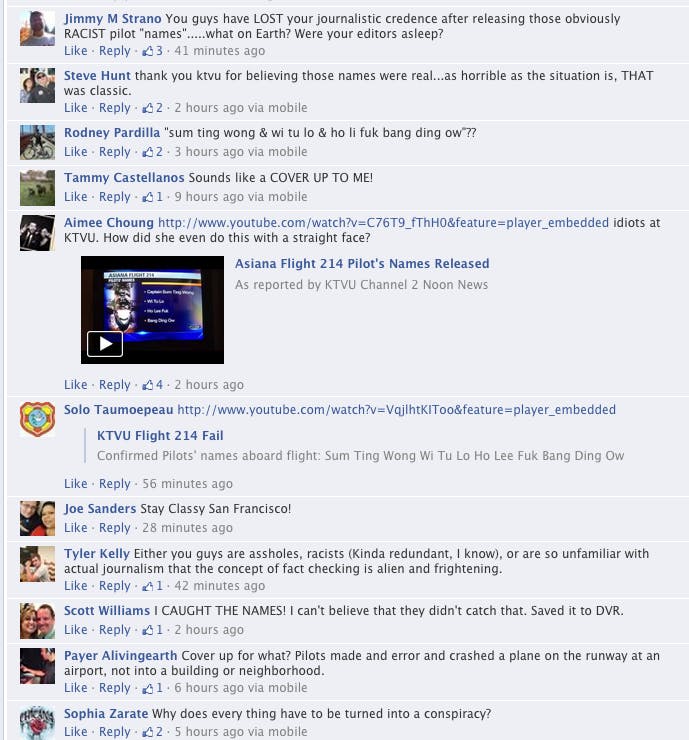 UPDATE: The Asian American Journalists’ Association condemned KTVU’s coverage, writing that it “made a mockery of the Asiana Airline tragedy and offended so many loyal viewers of the San Francisco Bay Area station.”

Meanwhile, KTVU has published a new apology on its website, standing by its claim that the names it aired were confirmed by the NTSB. It also published the correct names of the two pilots, Lee Gang-guk and Lee Jeong-Min.

UPDATE 2: The NTSB has issued a press release explaining that a summer intern confirmed the names, “[acting] outside the scope of his authority.” The full release follows:

The National Transportation Safety Board apologizes for inaccurate and offensive names that were mistakenly confirmed as those of the pilots of Asiana flight 214, which crashed at San Francisco International Airport on July 6.

Earlier today, in response to an inquiry from a media outlet, a summer intern acted outside the scope of his authority when he erroneously confirmed the names of the flight crew on the aircraft.

The NTSB does not release or confirm the names of crewmembers or people involved in transportation accidents to the media. We work hard to ensure that only appropriate factual information regarding an investigation is released and deeply regret today’s incident.

Appropriate actions will be taken to ensure that such a serious error is not repeated.

UPDATE 3: The NTSB has clarified to SFGate that the fake names “originated at the media outlet” and that the intern was “trying to be helpful” by confirming them. The NTSB reiterated that it does not “release or confirm the names of crew members or people involved in transportation accidents to the media.”