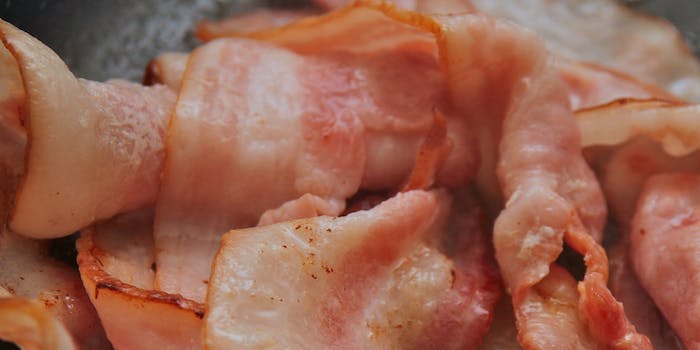 No one was apparently injured, but a lot of ham went to waste.

An Amtrak train carrying 203 passengers collided on Friday afternoon with a truck hauling tens of thousands of pounds of bacon. There were no immediate reports of injuries.

The accident took place at about 4pm local time in Wilmington, Illinois, roughly 50 miles south of Chicago, the train’s destination.

Officials said the truck was blocking the tracks at the time of the collision. The vehicle was shown on its side near the roadway outside a crossing gate in photographs circulating online. No immediate information was available about the driver.

Source at scene tells me truck struck by @Amtrak train in Wilmington was carrying 70,000 tons of BACON. @nbcchicago pic.twitter.com/rnJzoMSBoQ

The collision was apparently a mild bump for the passengers. “We didn’t really know if we’d hit something, or [if] we had just done a break-check kind of thing,” a passenger told NBC Chicago.

Train No. 22, also known as the Texas Eagle, was en route to Chicago from San Antonio. It will be held in Wilmington for an investigation, an Amtrak spokesperson said. Officials are currently working out how to transport the passengers to their destination.

My #train hit a truck full of #bacon. Nobody was seriously hurt except for the pigs a few days ago. #amtrak

Friday’s collision is one of several train accidents in the U.S. this year. In February, seven people were killed and dozens injured in New York after a commuter train slammed into a sports-utility vehicle. Last month, an Amtrak train derailed in Philadelphia, killing eight and injuring more than 200 others.

Clarification: Contrary to local and national reports, it is unlikely that the truck involved in the accident carried 70,000 pounds of bacon. U.S. Department of Transportation weight standards allow a maximum gross vehicle weight—both the load and the truck—of 80,000 pounds. (States often have their own restrictions.) We have not been able to confirm the exact weight of the truck’s load, though it was likely closer to 35,000 pounds, given the standard weight of an unloaded, full-size tractor trailer.