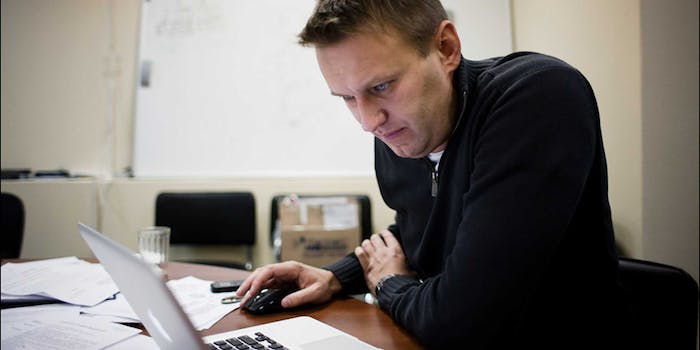 The figurehead of Russia’s resistance imprisoned on embezzlement charges

Alexei Navalny's LiveJournal blog transformed him into the voice of Russia's opposition.

Alexei Navalny, the man who turned a Livejournal account into one of the leading voices of Russian political dissent, has been sentenced to five years in prison for embezzlement. Many domestic and international critics say the charges are false, however—cooked-up by Russian President Vladimir Putin to silence one of his main critics.

Since 2009, Navalny has been a leading crusader against Putin and his United Russia party, which has dominated the Russian government for more than a decade. Navalny began his campaign with a Livejournal blog, which he used to organize large-scale demonstrations against corruption under Putin’s 13-year reign as Russia’s president and prime minister alternatively.

Navalny’s online activist work online has helped propel him into the mainstream of Russian media, contributing columns to Forbes Russia, and giving numerous interviews to Western media outlets as the unofficial leader of Russia’s unregistered political party, the People’s Alliance.

However, Navalny’s meteoric rise may be sidelined by the accusations that he lead a firm that embezzled more than $500,000 worth of timber from a state company. Though the charges stem from events that supposedly took place years ago while Navalny was serving as an unpaid adviser to the governor of the rural Kirov region. Russian officials took new interest in them after Navalny emerged as a strong opposition voice during the 2011 and 2012 elections.

The 37-year-old activist was forced to defend himself in a months-long trial that took place some 12-hours away from his home in Moscow. There, both sides fought vigorously in a trail that thinly veiled its nakedly political motivations.

“The whole Navalny case is viewed by the Kremlin as a warning to society,” Carnegie Center Russian Analyst Lilia Shevtsova told the BBC. “Vladimir Putin would like society to accept the new rules of the game, and the new rules are ‘You have to obey us on the principle of total and absolute loyalty. You don’t have the right to have ambitions, you have no right to fight for power. Loyalty is the main principle of your behaviour.'”

Navalny, who has been forced to end his mayoral bid for the city of Moscow because of his conviction, paints a similarly iron-fisted view of Russian government in his protests. During closing remarks at his trial, Navalny vowed to “destroy this feudal society that is robbing all of us.”

He added, “If somebody thought that on hearing the threat of six years in prison I was going to run away abroad or hide somewhere, they were mistaken.”

Navalny’s prominence in Russian political dissent is the product of the same online organizing tactics that have fuel the Occupy and Arab Spring movements. In fact, he’s even predicted Arab Spring type uprisings in Russia within the next few years.

The response from western diplomats and media outlets seems universally in Navalny’s favor, with the BBC comparing him to another famously jailed dissident.

Edward Snowden says he might seek Russian citizenship. In other news, Russian whistleblower Alexei Navalny sentenced to 5 years in prison

We are deeply disappointed in the conviction of @Navalny and the apparent political motivations in this trial.

And reaction in Russia was tense according to reporters on the ground there.