4chan attacks SocialVevo and Rantic.com, the group behind the Emma Watson countdown

Serial hoaxsters SocialVevo get hacked in what's become the most bizarre prank war on the Internet.

The serial pranksters known as SocialVevo chose the wrong online community to mess with.

The group was behind EmmaYouAreNext.com, a countdown site promising to release nudes of Harry Potter star Emma Watson. That’s just the beginning. A photo of the SocialVevo servers, obtained by users of 4chan’s imageboard /b/, apparently connects them to more than 30 Internet pranks built off news trends.

The goal of all these pranks were to drum up publicity and business for SocialVevo’s marketing products.

SocialVevo attempted to pin the blame for the Emma Watson leak on 4chan, an 11-year-old community where nothing is sacred. 4chan is where some of the Internet’s most notorious pranks are concocted, and it’s well known for its obsession with Emma Watson—so it makes sense that 4chan might be behind that creepy countdown.

So 4chan hit back: It defaced the website for SocialVevo’s latest ruse, Rantic.com, and uncovered new evidence connecting the group to some of the Internet’s most recent hoaxes. 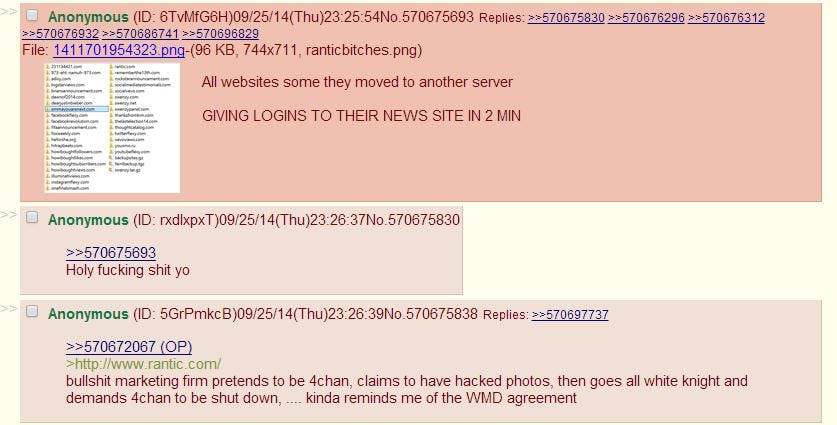 /b/ released an image showing folders for each of SocialVevo’s pranks, including Rantic.com, the group’s latest rebranding effort. (SocialVevo is also known as Swenzy.) 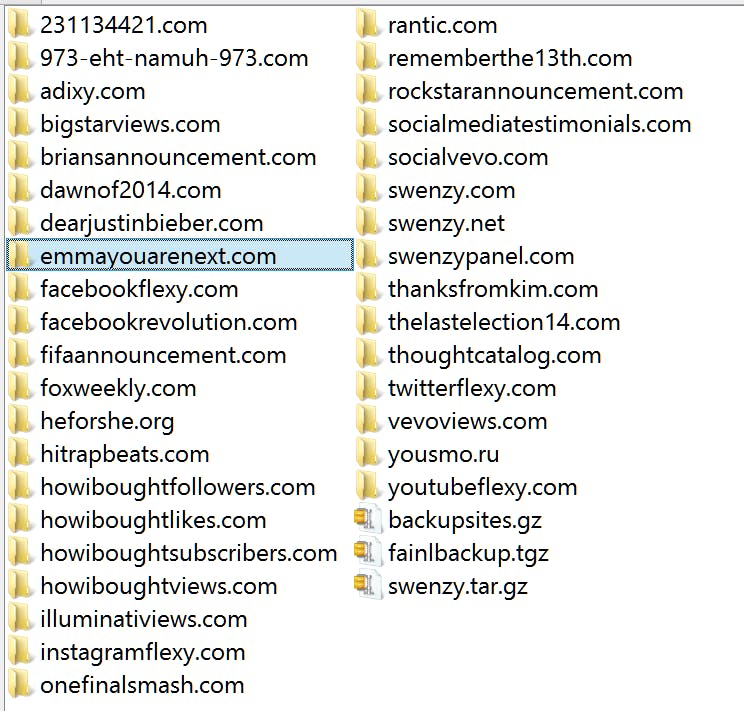 The following is a brief breakdown of some of the websites featured in the image above:

Rememberthe13th.com: A fake NASA site that promised to release a stunning scientific discovery. The site was created during the government shutdown last October. Because most NASA employees were prohibited from working during the shutdown, Rememberthe13th.com ended up collecting some social media traction before some Reddit sleuths discovered it was a hoax.

BriansAnnouncement.com: Following the on-screen death of Family Guy dog Brian, SocialVevo created a website that featured a countdown to some big announcement. Despite having no tangible connection to Family Guy or Fox, news organizations like CNN, Time, and Gawker ran stories covering the site. The site ended up being a lie after Fox told TVLine that the site was a “hoax and was not created by anyone connected to the show.” 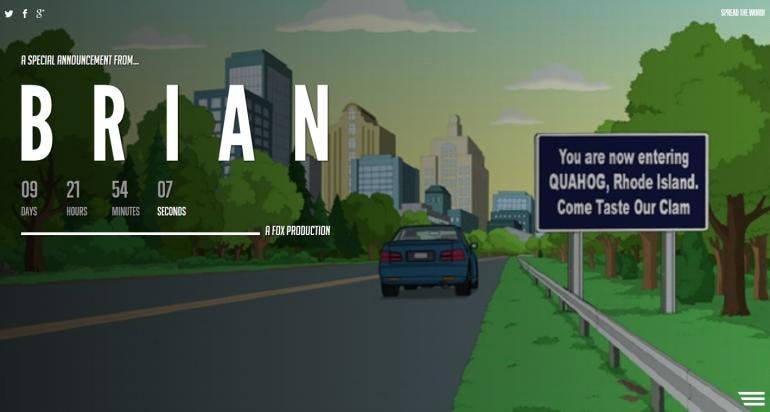 RockStarAnnouncment.com: A few weeks after BriansAnnouncement.com flopped, SocialVevo tried to capitalize off the Grand Theft Auto V buzz by promising to leak photos the next installment of the video game series. 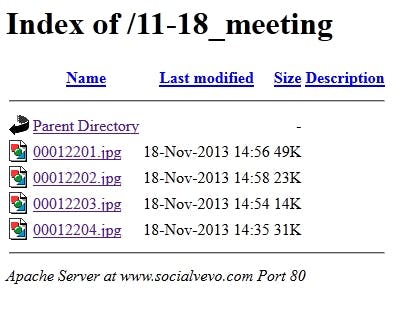 FoxWeekly.com: In May 2014, after media organizations caught on to what SocialVevo was up to, the group decided to launch a “news site” consisting of stolen content. FoxWeekly is a blog that swipes and republishes articles from the BBC, Fox News, and the New York Times.

Rantic.com rose to promience last week after some Reddit, 4chan, and 8chan users connected it to EmmaYouAreNext.com. I contacted one of the SocialVevo founders to find out if the connections between each were legitimate.

“[T]hose 4channers are just eating on that article you published about the fox site,” he told me via Skype chat Tuesday afternoon. “[M]e and simon [one of the other alleged founders of SocialVevo] are trying to find out who owns the countdown too. [I]t started in 4chan. [W]e keep getting our emails hacked by 4chan users and ppl emailing us about the countdown its [sic] annoying as f**k.”

Hours after this conversation, the countdown on EmmaYouAreNext.com stopped, and the site redirected to Rantic.com, which had abondened its minimalistic design in favor of this: 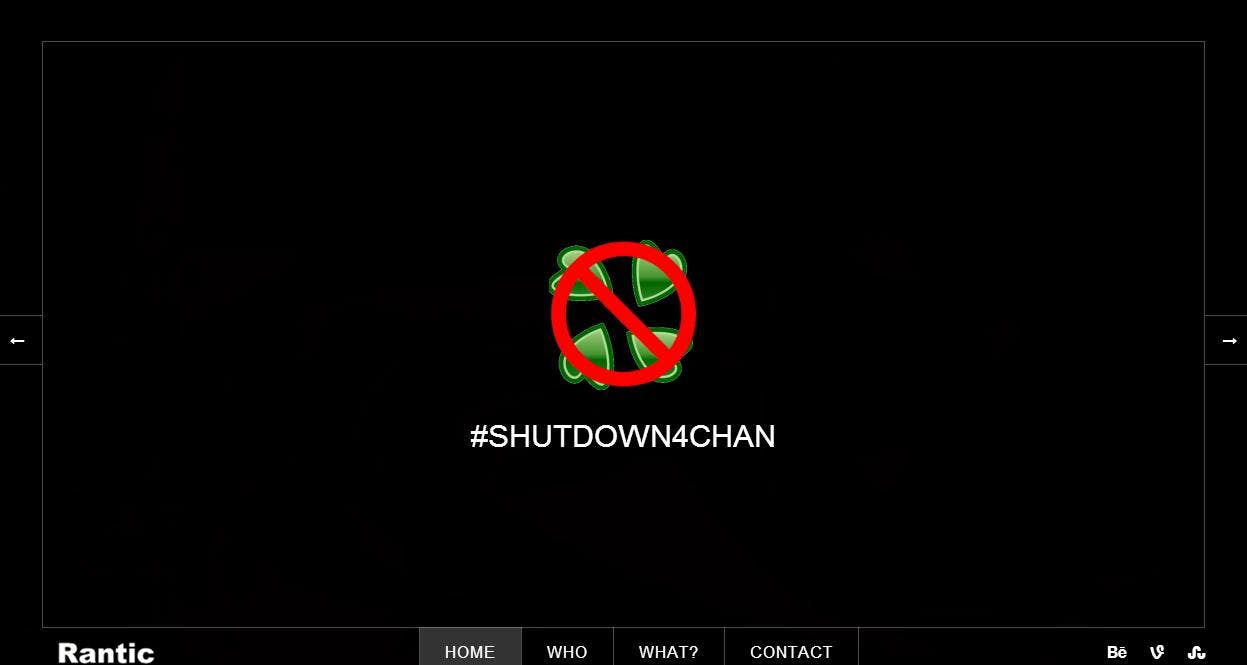 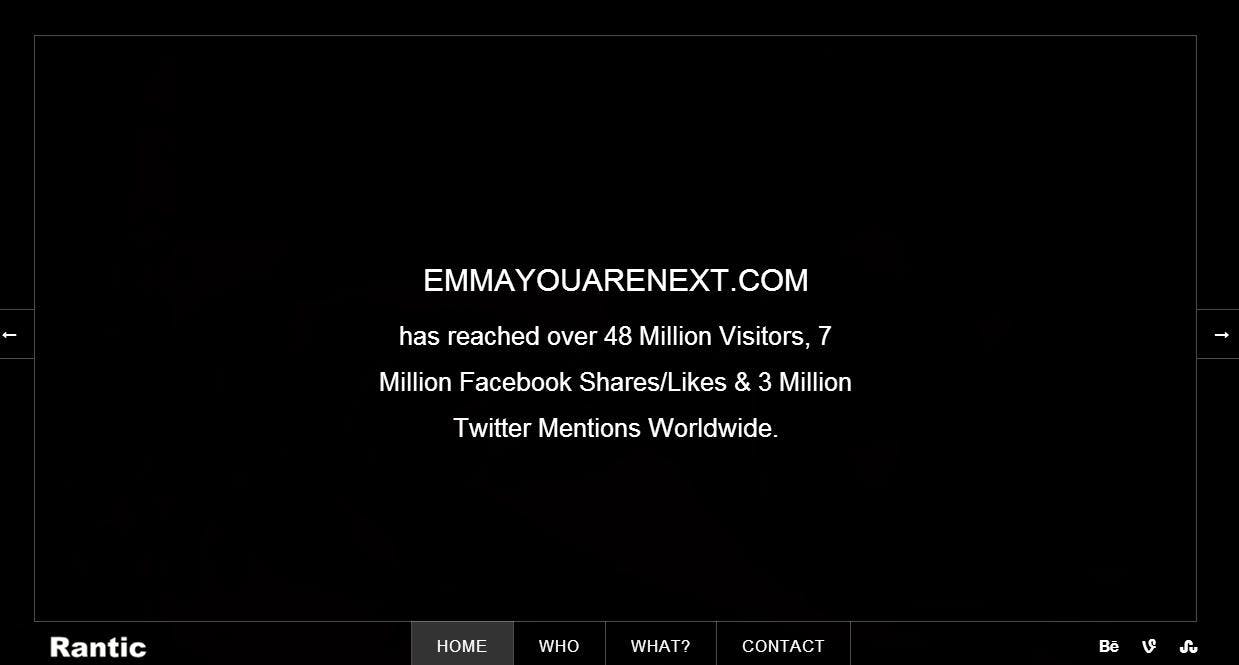 These threats didn’t go over well with 4chan.

On Friday, /b/ gained access to rantic.com and defaced it. 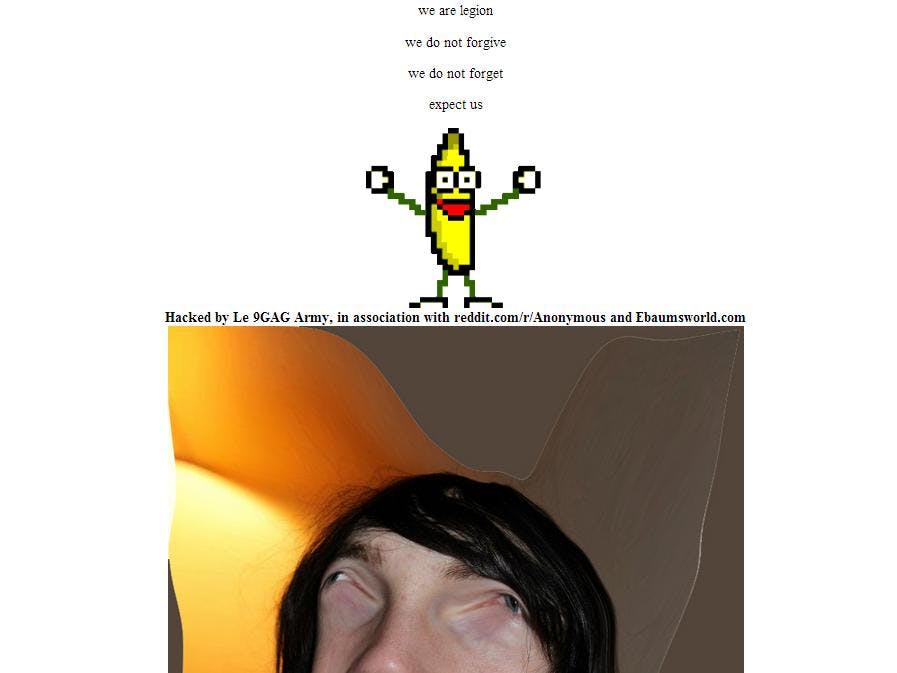 Desperate to regain control of its site, SocialVevo sent out the following messages on Rantic’s Twitter account: 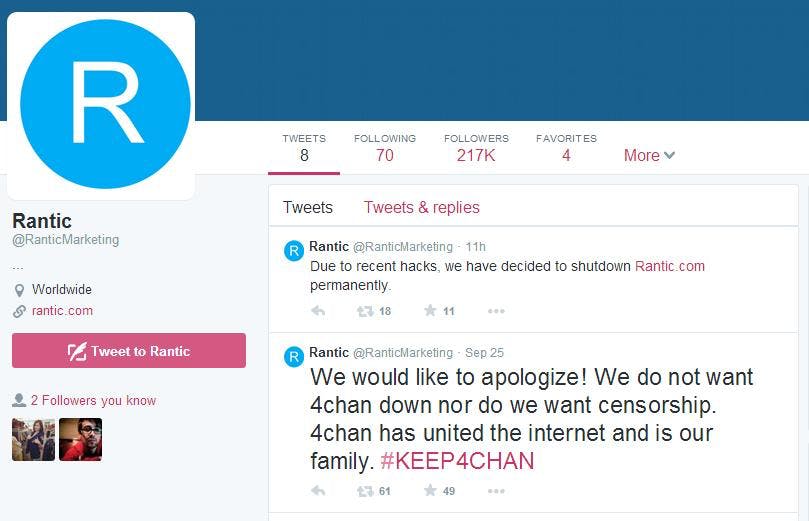 The apology was too late.

In a now deleted /b/ thread, anonymous 4chan users gained access to FoxWeekly’s WordPress CMS and began messing with its site. 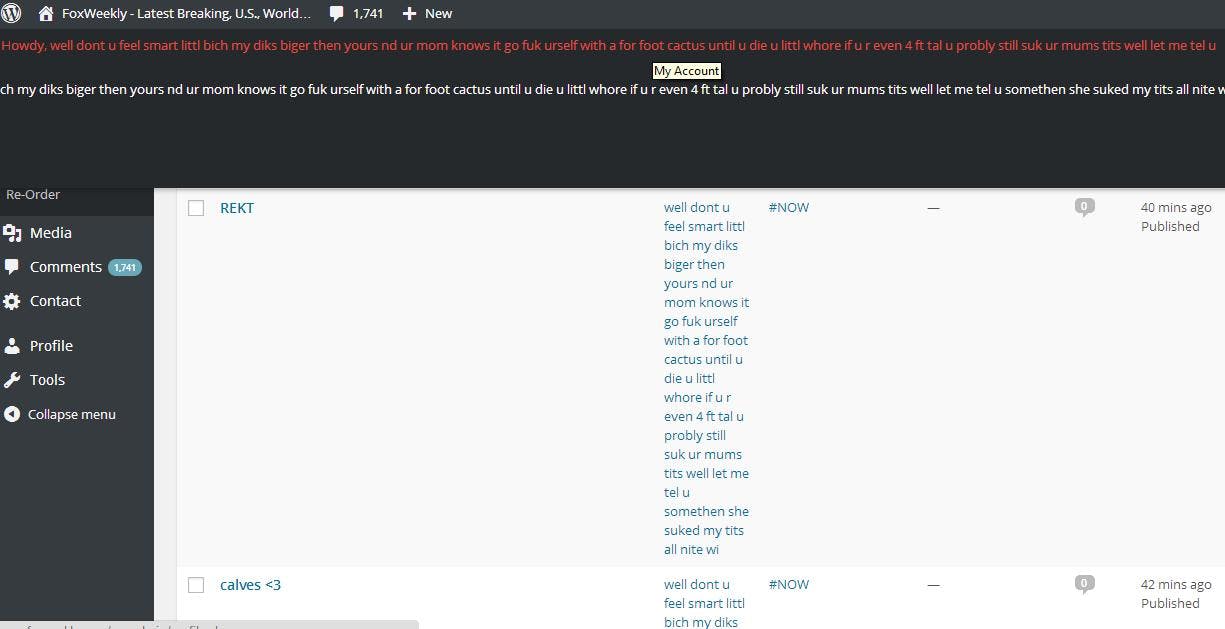 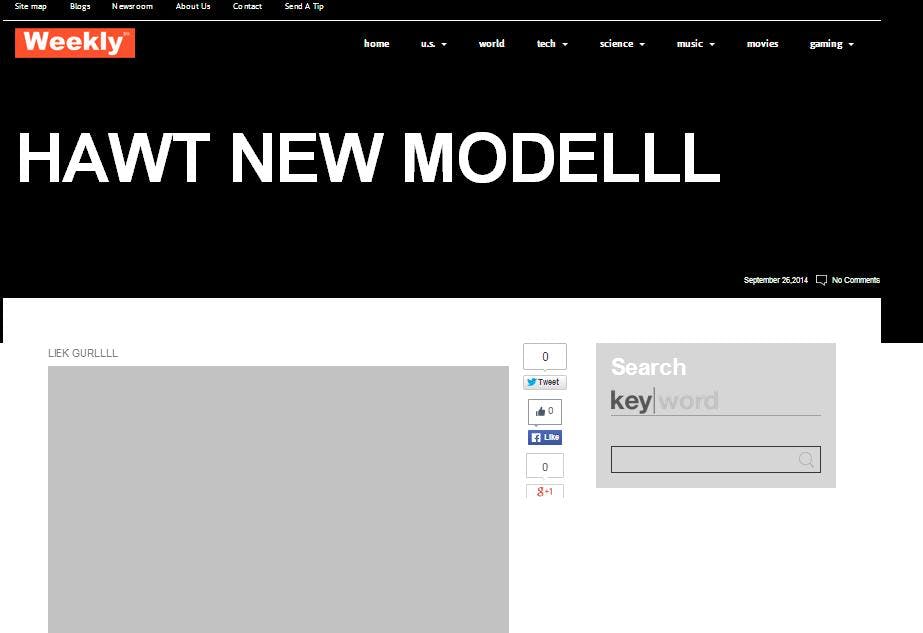 This was featured on FoxWeekly’s homepage as of 11:45pm Friday. 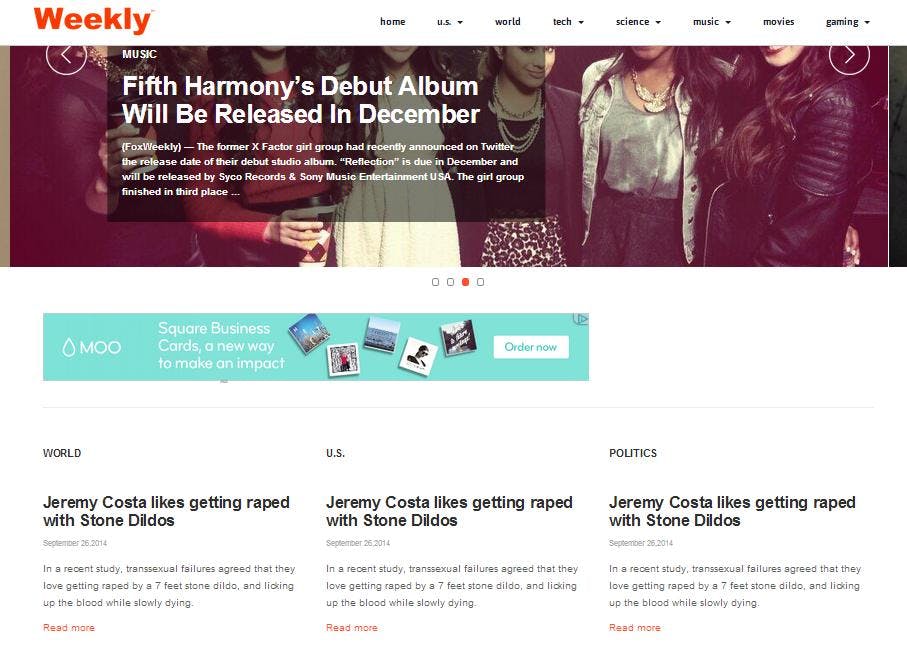