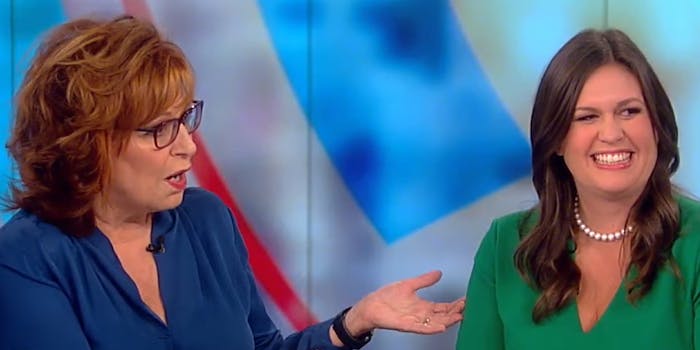 Sarah Huckabee Sanders gets grilled by hosts of ‘The View’

It was pretty awkward.

During the discussion, Sanders turned to the blame-the-media tactic that has become commonplace among the Trump administration, but at least two of The View’s co-hosts weren’t going to let that slide.

“Is the media supposed not report on the fact that 95 percent of what he says is a lie?” Behar asked Sanders.

Sanders smiled uncomfortably as Behar backed herself up citing a scorecard from PolitiFact, a nonpartisan fact-checking website, that lists only 5 percent of Trump’s statements as “true.” By comparison, 15 percent of his statements are listed as “pants on fire,” or completely false.

Sanders called it a “false narrative” and said she “completely” disagreed with the 5 percent statistic.

Soon, Goldberg stepped in, trying to prove the point that Behar brought up. She needed only two questions to support Behar.

The exchange was pretty awkward.

“Where was President Obama born and is he an American citizen?” Goldberg asked, referring to the so-called “birther” movement that Trump relentlessly pushed for years.

“I think this has been pretty well addressed,” Sanders said.

“This narrative, this is what I’m talking about, that’s a narrative that went on forever and he didn’t clear it up until after he was in office,” she said.

Sanders appeared on The View with her father, Mike Huckabee, the former governor of Arkansas and multiple-time presidential nominee.

You can watch the entire exchange here: