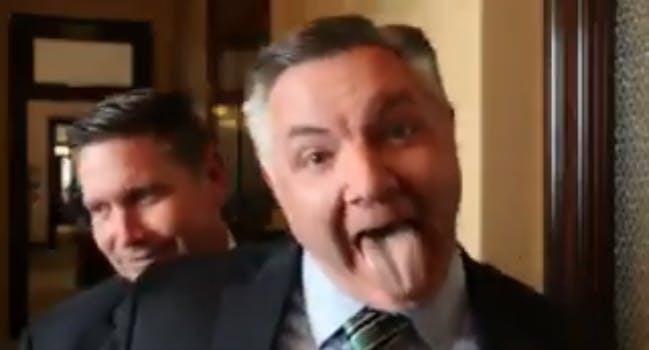 The Utah House of Representatives released a rap video on Thursday with the intention of educating the public about how a bill becomes law. Now they’re getting roasted for just how awful it is.

State lawmakers redrafted the lyrics to Will Smith ’90s sitcom The Fresh Prince of Bel-Air’s theme song in the cringeworthy clip that lasts 75 seconds (arguably 75 seconds too long).

The “Fresh Prints of Bills Here” remix delivers on awful lyrics and awkward timing as the enthusiastic politicians do their best to detail the legislative process in potentially the worst attempt at rap of all time.

“Now this is a story all about how, our bills get flipped into a law,” the abomination begins. “I’d like to take a minute just sit right there, I’ll tell you how a bill becomes law in this our chamber.”

Yes, that’s “cham-bear.” It’s safe to say that confidence does not make up for lack of talent when it comes to rhyming.

The video features 20 overeager lawmakers, most of whom are Republicans, and one Make America Great Again baseball cap.

Here it is, in all its glory:

Twitter users, as expected, did not hold back in their judgment.

brb labeling this as a public health hazard pic.twitter.com/ndbwVOy4Cg

Every one of the reps need to be voted out of office for this video. Just horrible….
BRB, going to go watch it again.

Still, the lawmakers appear to be taking it all in fair jest.