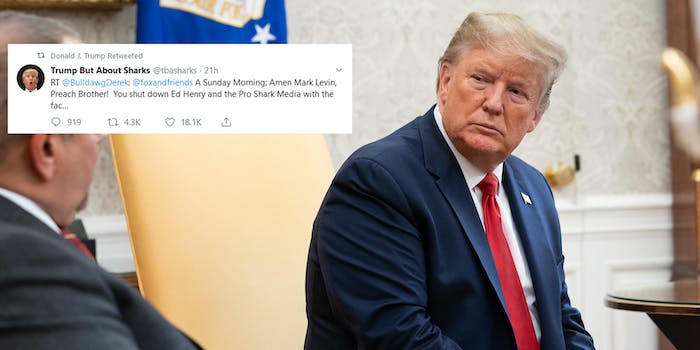 It was an apparent mistake.

President Donald Trump on Sunday retweeted a Twitter bot that changes his tweets to include the word “shark” amid a frenzy of retweets about a segment on Fox News.

The president seemed to be quite interested in an argument that conservative radio host Mark Levin had with Ed Henry of Fox News. It’s about the phone call Trump had with Ukranian President Volodymyr Zelenskiy that is at the heart of calls for impeachment.

Within the nearly 20 retweets about the segment, Trump retweeted a bot called “Trump But About Sharks,” which places the word “shark” into tweets from the president. The bot had reworked an earlier tweet that Trump had retweeted, replacing “fake news” with “Pro Shark Media.”

The bot plays off of Trump’s reported hatred of sharks.

Last year the president’s apparent dislike of sharks came out during a transcript of an interview InTouch Weekly had with Stormy Daniels, the adult film actress who says she had an affair with the now-president.

In the interview, Daniels said Trump was “terrified of sharks” and that he told her he hoped that “all the sharks die.” He’s also railed against sharks numerous times in the past on Twitter.

The president’s apparent mistake in retweeting something from the “Trump But About Sharks” account was noticed by many online.

Not only did he not click through, he couldn’t be bothered to read 200 characters. 😭😭😭 pic.twitter.com/TRfutGE348

The Pro Shark media is up to some shit pic.twitter.com/qARVHok3o9

Finally, a president who takes seriously the nefarious threat posed by the Pro Shark Media pic.twitter.com/WxWoCx5Fr8

I disagree with a lot of what @realDonaldTrump says, but I think this is one issue every red-blooded American can agree on. The Pro Shark Media is taking a huge bite. Follow the krill. pic.twitter.com/kAv5lNXEUj