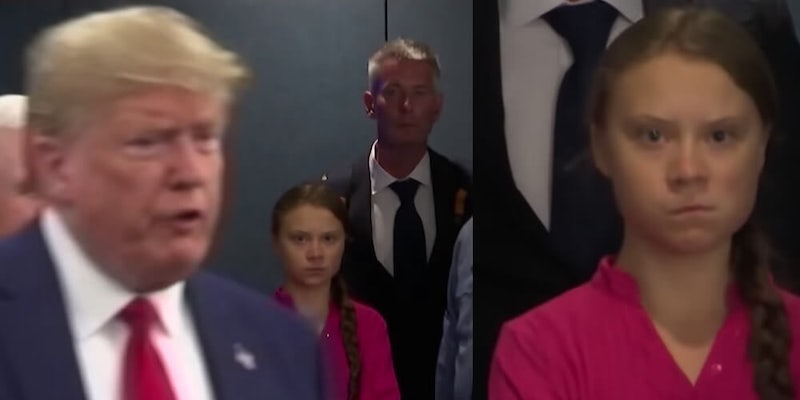 Teen climate activist Greta Thunberg did not look not pleased with President Donald Trump, as she watched him walk past her at the U.N. Climate Action Summit on Monday.

Trump, who has called the climate change a “hoax” in the past, was reportedly only at the summit for about 14 minutes. It is reported that he was not even supposed to be there and was supposed to attend a panel on religious percussion instead. Regardless, he made a brief appearance, and, as he arrived in the lobby of the U.N., he happened to walk right past Thunberg.

The tense moment was captured on video and is now everyone’s favorite GIF.

Greta Thunberg’s glare at Donald Trump is giving me the energy to get through this Monday pic.twitter.com/xdM0rdI2ln

Find yourself someone who looks upon your worst enemy the way Greta Thunberg looks at Trump. pic.twitter.com/euhZ51abAB

The 16-year-old activist has captured the attention of the world in her fight against climate change. She spoke to world leaders on Monday, criticizing them for caring more about money than they do people and for failing to do enough to prevent the rapidly changing climate.

“You all come to us young people for hope,” she said. “How dare you. You have stolen my dreams and my childhood with your empty words. Yet I’m one of the lucky ones. People are suffering. People are dying.”

Thunberg arrived in the U.S. a few weeks ago by sailboat, her notable method of transportation. (She travels the world on a sailboat that uses solar panels and underwater turbines to generate electricity.) When she arrived in the U.S., CBS News asked her in an interview if she would speak to Trump during her time here.

“Why should I waste time talking to him when he, of course, is not going to listen to me?” She told the outlet. “I can’t say anything that he hasn’t already heard.”

Thunberg is set to set sail to Chile next for another U.N. Climate Conference.