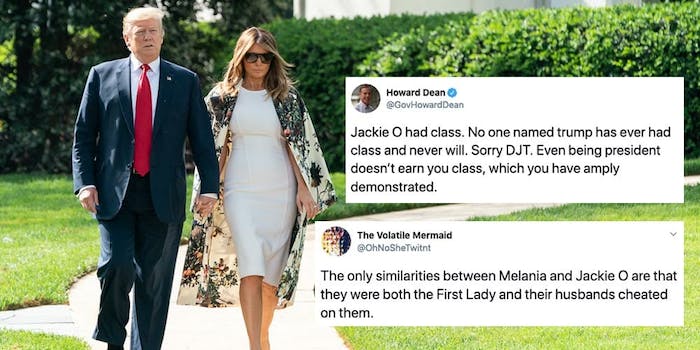 The *actual* similarities are maybe not something he should bring up.

President Donald Trump gave a wide-ranging special birthday interview on Friday morning’s Fox & Friends. Among the topics of conversation on the table were everything from his Kellyanne Conway problem to his Joe Biden problem—but he also took some time to discuss his proposed Air Force One redesign.

In doing so, he managed to step in it by comparing his wife, first lady Melania Trump, to former first lady Jacqueline Kennedy Onassis.

“It’s been a long time, and it fits the plane better—you know, it’s a very different plane, and even though it’s a 747 [sic],” Trump told his grinning interviewers. “And I like the concept of red, white, and blue in the classic, and I think it’s going to look much better, actually.”

“You know, the baby blue doesn’t fit with us—people get used to something, and it was Jackie O and that’s good,” he continued. “But we have our own Jackie O today. It’s called Melania. Melania … we’ll call her Melania T! OK?”

Putting aside the fact that he referred to his wife as an “it,” Trump is saying that Jackie Kennedy was the inspiration for the original design of the first Air Force One in 1962. The classic slate blue and contemporary cyan color scheme—which was intended to represent the early republic and future of the presidency, respectively—has since carried through in each iteration of the aircraft into the present.

But whether one views an update of Air Force One as blasphemy, people were definitely not pleased with Trump’s comparison of the timeless style icon to the first lady known for her tree-planting stiletto heels and “I really don’t care, do u” jacket.

Jackie O had class. No one named trump has ever had class and never will. Sorry DJT. Even being president doesn’t earn you class, which you have amply demonstrated. https://t.co/hEyRLvI89q

Trump says Melanie is the new Jackie O. I have to agree! I’m so glad we finally have a First Lady with some style and taste back in the White House. Let’s remember some of her signature looks: F Brown Kids, Trump Hotel Drapes, Complicit Barbie, and of course Murder Christmas. pic.twitter.com/lBOzJxbHHJ

Others were just gobsmacked to learn why “Jackie O” was trending in the first place:

When you click on "Jackie O" to see why it's trending pic.twitter.com/hxmXTgto75

When I saw why Jackie O is trending. pic.twitter.com/Yefs9zvc5d

When you see Jackie O is trending and find out why pic.twitter.com/1oUYIsjOdT

And then some people pointed out that the actual similarities between Jackie O and Melania are … maybe not something he wants to bring up.

The only thing Melania and Jackie O have in common is that their husbands weren't faithful.

Awkward, to say the least!