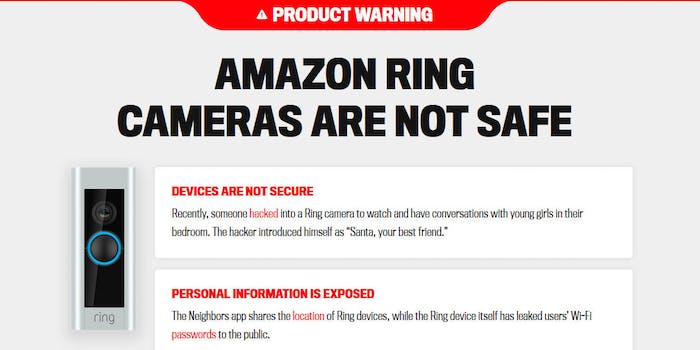 The groups are highlighting a number of issues that have come up regarding the devices recently.

As millions of people do some last minute shopping amid the holiday rush, a number of digital and civil rights groups are warning people not to buy Ring doorbells.

The groups launched a website last week to fight against the surveillance gift.

The warning to not buy the Ring doorbells, which are owned by Amazon, come on the heels of criticism of the devices, particularly the company’s relationship with law enforcement and a recent string of publicized hacks where bad actors have interacted with people inside their homes through the cameras.

The group of organizations which include Fight for the Future, Demand Progress, Free Press, Mijente, and others, set up a website earlier this month that asks people to think twice about buying the products.

“Amazon Ring cameras are not safe,” the website reads, attaching several links to a number of reports about the devices being hacked, exposing WiFi passwords, and questions surrounding the company’s relationship with law enforcement.

“The dangers associated with these products pose a threat to families and the public. As groups dedicated to protecting consumers privacy and safety, we are issuing this official product warning: Do not buy Amazon Ring cameras.”

Ring denied that it had a data breach, telling the news outlet that it was “not uncommon for bad actors to harvest data from other companies’ data breaches and create lists like this.”

Around the same time, TechCrunch reported that around 1,500 emails and passwords associated with Ring devices were found on the dark web by a security researcher.

A spokesperson told the news outlet that they notified customers who were exposed in that data set and that it was monitoring for unauthorized log-in attempts.

A number of hacks into the devices have been publicized in recent weeks, including one incident in Mississippi where a hacker spoke to an 8-year-old in her room, according to the Washington Post.