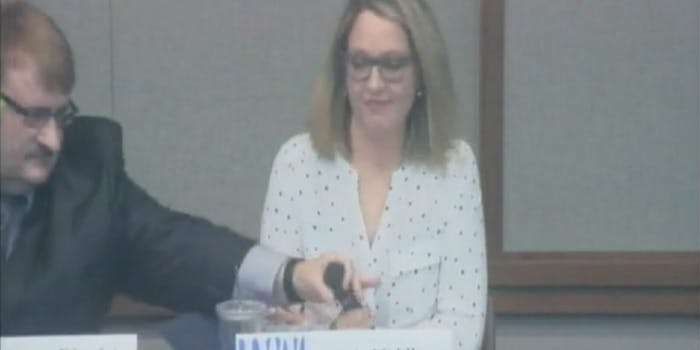 He shocked both the moderator and his opponent.

Minnesota House Rep. Duane Quam (R) is having a normal one today. In an incredibly diplomatic move that surely won’t backfire for his campaign, Quam leaned over and ripped the microphone from Democratic opponent Jamie Mahlberg during a local debate.

On Monday night, Quam and Mahlberg answered a variety of questions impacting Minnesota’s House District 25a, including each candidate’s policy on public education funding in the district.

After Mahlberg chimed in with her response on the matter, Quam leaned over and ripped the mic straight from her hands, shocking the Democratic candidate. After Quam responded, he hovered the microphone in front of Mahlberg and then threw it in front of her, causing the moderator to awkwardly laugh as Mahlberg was once again taken by surprise.

Mahlberg has since criticized Quam for his behavior during the debate, although she doesn’t seem too distracted by it.

“It was disappointing to be on the receiving end of such disrespectful behavior from my current representative, but ultimately I’m focused on my campaign and the hard work I will continue to do to earn the support of the voters of the district,” Mahlberg told Splinter News.

Twitter, on the other hand, is having a field day with Quam’s bizarre response.

I’m gonna go out on a limb and guess that the angry white man who rips the mic away is the Republican. https://t.co/lNsIrSy12W

Excuuuuse me, but WHUUUT?! 🤨
This behavior is trash. I cannot believe someone would act like that at all, but to do it in a public setting in front of potential constituents is utterly baffling. https://t.co/DZHICyICYY

Mahlberg is one of several hundred Democratic women challenging male Republican incumbents in this year’s upcoming local and national midterm elections. Over 195 Democratic women are running for the U.S. Congress, with 256 women between both parties, CNN reports.