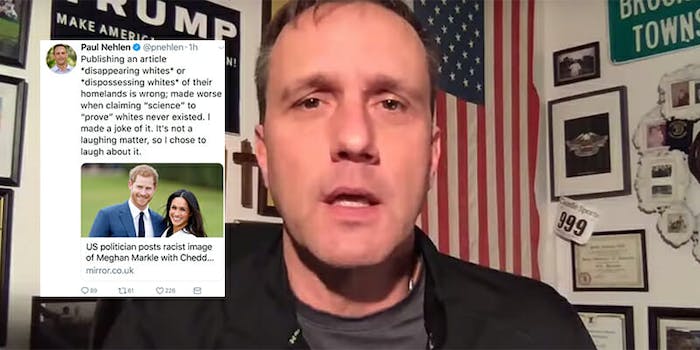 Twitter confirmed on Monday that it has permanently banned Republican congressional candidate Paul Nehlen for posting a racist image directed at Meghan Markle, the fiancee of Britain’s Prince Harry.

The offending tweet, posted by Nehlen on Friday, included an image of the royal prince next to Markle, whose face was superimposed with a picture of the reconstructed visual of “Cheddar Man,” Newsweek reported. Cheddar Man is the name given to the oldest complete skeleton found in Britain; researchers say he had dark skin and dark hair.

Nehlen is running to replace House Speaker Paul Ryan (R-Wis.), who he ran against in 2016 with the support of White House chief strategist Steve Bannon. The caption of Nehlen’s Markle tweet reportedly said, “Honey, does this tie make my face look pale?”

Users slammed Nehlen for the racist image. Actor Patrick J. Adams, who co-starred with Markle on the legal drama Suits, called Nehlen a “sad and sick man with no sense of shame or class.”

Oh @pnehlen – you’re a sad and sick man with no sense of shame or class. Get a life. And don’t go anywhere near MM – she’s got more power, strength, honor and compassion in her fingernail than you’ll ever know in this lifetime. Way above your weight class.

Nehlen defended his post with another tweet saying he was making a joke about articles that “‘science’ to ‘prove’ whites never existed.”

This racist POS is running for Congress (I won’t RT the original image of Markle he tweeted earlier). But we need to send the message that “candidates” like this have no place in our government and we’d be happy if they live the rest of there lives under the darkest rock. pic.twitter.com/XoDHCmbOK1

Twitter confirmed to Newsweek on Monday that Nehlen had been permanently suspended “for repeated violations of our terms of service.”

Nehlen has repeatedly been condemned as a white nationalist and “outrage artist.” Last month, Nehlen was criticized for anti-Semitism after he made a list of people who he said “attacked” him and classified each person as “Jew” or “non-Jew.”