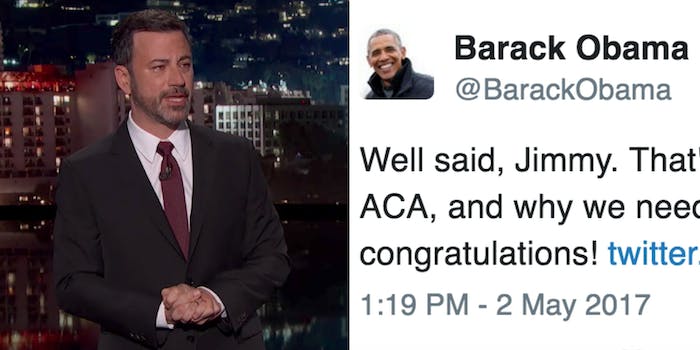 Well said, Jimmy. That's exactly why we fought so hard for the ACA, and why we need to protect it for kids like Billy. And congratulations! https://t.co/77F8rZrD3P

In the 13-minute monologue, which aired on Monday night and took over the internet on Tuesday, Kimmel fought back tears as he relayed the frightening turn of events that followed his son’s recent birth. Kimmel also thanked all the nurses and doctors who successfully treated Billy, as well as his friends, family, and co-workers for their support.

With Congress now considering a new healthcare plan that, in its current form, would give states the right to drop the provision that prevents health insurance companies from covering Americans with pre-existing conditions—a key provision of the Affordable Care Act (aka ACA or Obamacare)—Kimmel took the opportunity to add a dose of raw humanity to the policy conversation.

“If your baby is going to die and it doesn’t have to, it shouldn’t matter how much money you make,” Kimmel said. “I think that’s something that—whether you’re a Republican or a Democrat or something else—we all agree on that, right?”

With tears flooding his eyes, Kimmel added: “I saw a lot of families there, and no parent should ever have to decide if they can afford to save their child’s life. It just shouldn’t happen. Not here.”

Obama’s tweet of support is also a well-timed political maneuver in favor of his signature legislation. Republicans have already tried and failed once to “repeal and replace” the ACA, and they may try again this week. However, due to changes to GOP’s American Healthcare Act meant to appease far-right lawmakers in the House of Representatives, moderate Republicans have started to break ranks, making passage of the legislation less certain.

Given the spread of Kimmel’s message, boosted by Obama’s support, Republicans may be facing a higher chance of defeat than they realized even a day ago.