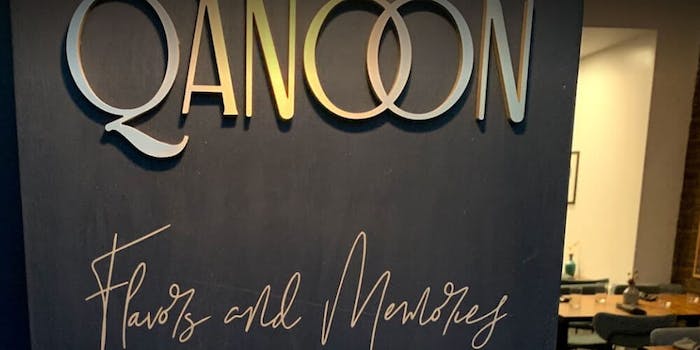 On the bright side, the restaurant reportedly has delicious food.

A new restaurant in New York City is gaining attention online–and not just for its reportedly delicious food. The restaurant is named “Qanoon.”

Located in the West Side Manhattan neighborhood of Chelsea, Qanoon offers traditional Middle Eastern cuisine and promises to take its customers on a “culinary journey inspired by Palestine.”

While the Qanoon appears to be receiving rave reviews from foodies, others have noticed that the restaurant’s name is strikingly similar to that of the “QAnon” conspiracy theory.

The conspiracy alleges that an anonymous individual inside the U.S. military intelligence apparatus is leaving cryptic clues online about President Donald Trump’s battle against the “deep state.”

NBC News journalist Ben Collins poked fun at the name on Friday in a thread on Twitter. “These people either don’t know what Google is, or they’re moderators on 8chan. There’s no other scenario,” Collins wrote.

Me: *starting to get nervous* Excuse me, waiter, we’ve been waiting for the main course for 110 weeks.

Waiter: *hands you Photoshopped picture of Hillary Clinton drinking blood from a goblet* It’s coming this week. Trust the plan.

Others also took the opportunity to draw comparisons between the restaurant and the absurd conspiracy theory. “[hands menu back to waiter] Hm. Sure. I’ll have the ‘Where We Go One We Ganoush’ you recommended,” Twitter user @BobSaietta quipped, referencing the QAnon motto, “Where we go one, we go all.”

[hands menu back to waiter] Hm. Sure. I’ll have the “Where We Go One We Ganoush” you recommended

Another NBC News employee, who speaks Arabic, however, argued that he did not even notice the similarity initially. “I mean I speak Arabic and it seemed very right, my mind did not jump to QAnon til I re-read ten times,” Tim Fitzsimons
tweeted.

AND THE FOOD LOOKS GREAT!

One Twitter user stated that the word, pronounced “kanoon,” means “The Law” in Urdu, the official national language of Pakistan. Others have said the word refers to a string instrument popular in the Middle East.

Thankfully, followers of the cult-like QAnon conspiracy don’t appear to have discovered Qanoon just yet. With any luck, the restaurant will remain successful and won’t be bogged down by the internet’s stupidity.