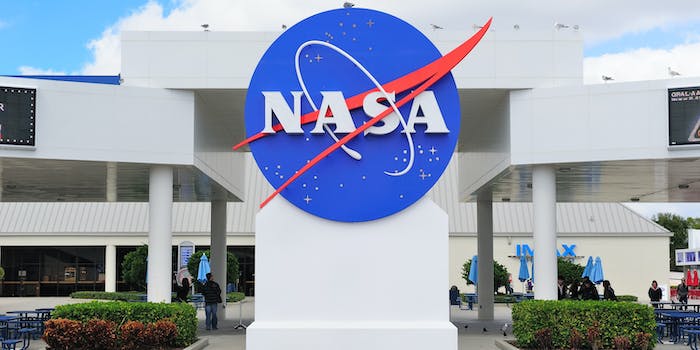 NASA appears to have invented a new rule that seemingly affects only users of a popular online FOIA service.

Users of a popular online service that helps the public acquire legal access to government records face new hurdles when petitioning NASA under the Freedom of Information Act (FOIA).

The National Aeronautics Space Administration has begun rejecting public records requests from users of FOIA request-filing service MuckRock, which doesn’t provide what the agency calls a “personal mailing address,” even though the requirement appears to have no basis under the law.

MuckRock, founded in 2010, has helped its members (including the Daily Dot) file more than 28,000 FOIA requests at federal, state, and local agencies. Its staff also frequently publishes articles based on government records they uncover through FOIA. On Tuesday, for example, MuckRock released a batch of emails from the Office of Government Ethics, revealing the agency’s frustrations after failed attempts to communicate with the Trump transition team in an effort to stem potential conflicts of interest.

A radical experiment, the Freedom of Information Act was established in 1966 to combat excessive government secrecy during the Cold War. The law was later enhanced in the aftermath of the Watergate scandal of the 1970s, placing new requirements on executive agencies obligated under FOIA to release non-exempt records at the public’s request. Seen as vital to a democratic society, FOIA’s purpose is to ensure an informed citizenry—or to hold “the governors accountable to the governed,” to paraphrase the U.S. Supreme Court.

In the days after the presidential inauguration, the White House reportedly began enforcing a “media blackout” at multiple government agencies. At the Environmental Protection Agency—whose mission to protect human health and the environment seems to clash with the Trump administration’s anti-regulation efforts—emails relayed orders from the White House that banned “press releases, blog updates, or posts to the agency’s social media accounts,” according to the Associated Press.

Other federal agencies faced similar restrictions, AP reported, including the Departments of Transportation, Agriculture, and Interior. It was during this time that the Daily Dot—empowered by FOIA—asked NASA to turn over any records it had reflecting orders from the White House that may limit its ability to communicate with the public. NASA’s Office of Strategic Communication, which handles requests from the media, had already refuted that any such orders existed, but we wanted proof: Like the National Park Service, one of NASA’s Twitter accounts had continued tweeting about carbon dioxide levels in Earth’s atmosphere—seemingly a reference to global warming, which now-President Trump once labelled a “hoax” invented by the Chinese.

Last week, following nearly two months of back and forth, NASA formally denied the Daily Dot access to any records—which may or may not exist—related to White House decrees affecting its use of social media and other forms of communication. The request, filed less than a week after Trump’s inauguration, was sent using MuckRock’s online submission system and contained MuckRock’s mailing address. “Please be advised, that everyone submitting a FOIA Request via Muckrock, who are not a staff members [sic] must provide their personal mailing address when submitting a requests [sic],” NASA’s FOIA officer, Josephine Shibly, wrote in a letter to the Daily Dot on March 10.

NASA’s demand for a “personal mailing address” is supported by neither the federal statute nor the agency’s own internal policies. As such, the Daily Dot ignored the request for a “personal mailing address,” which is a rarely used phrase appearing only in federal regulations concerning blood donors and refugees. In an appeal filed Monday—borrowing from a 2013 letter authored by the Electronic Privacy Information Center—the Daily Dot charged NASA with violating its legal obligations while engaging in unauthorized rulemaking, citing the Administrative Procedures Act of 1946.

March 10 was the first time NASA had rejected the request. Three days after the request was filed in January, the agency mailed a letter stating it was “overly broad,” arguing its staff was not required to have “clairvoyant capabilities” nor aid members of the press in “fishing expeditions” for government documents. Hours before, the agency had rejected a request to expedite the release of the records, seemingly arguing that potential orders from the White House curtailing NASA’s ability to communicate with the public was not an issue of vital importance to the American public.

The D.C. Circuit court, which presides over an abundance of FOIA-related lawsuits, has repeatedly ruled that federal agencies are obligated to give special priority to requests concerning breaking news events if the news concerns federal government activity—particularly when the issue at hand may affect public confidence. (Under this rule, NASA would have 10 calendars days to respond to a request, as opposed to the statutory 20-working-day period.) NASA’s decision to deny the expedited release of the records appears wildly out of sync with judiciary’s interpretation of the law.

NASA’s initial rejection itself seemed newsworthy and was the basis of an unpublished February article. Reached for comment about its decision, however, the agency backed down and agreed to process the request.

The agency’s decision to deny a request because a “personal email address” was not furnished is both “illogical and unnecessary,” the Daily Dot wrote in its appeal. MuckRock is an important service to many journalists who’ve not yet mastered the art of handling the large quantities of paper documents that arrive in the mail as a result of extensive FOIA requests. While most agencies offer documents via email, MuckRock regularly receives paper documents requested by its members from the government and then offers them in electronic form.

NASA’s argument was that it required a “personal mailing address” for “invoicing purposes,” which its FOIA office claims is the purpose behind a policy codified in the Code of Federal Regulations—only, that’s not what the regulation states, either implicitly or explicitly.

(a) A requester submitting a request for records must include his/her name and mailing address, a description of the record(s) sought (see § 1206.301), and must address fees or provide justification for a fee waiver (see § 1206.302) as well as address the fee category in accordance with § 1206.507. It is also helpful to provide a telephone number and email address in case the FOIA office needs to contact you regarding your request; however, this information is optional when submitting a written request. If a requester chooses to submit a request online via the NASA FOIA Web site, the required information must be completed. Do not include a social security number on any correspondence with the FOIA office.

“The regulation does not state that a requester must provide a ‘personal mailing address,’ it merely states that a ‘mailing address’ must be provided,” the Daily Dot’s appeal reads. “If NASA is able to mail responsive records to the Daily Dot care of MuckRock, then any invoice NASA needs to submit could also be delivered in this manner. NASA appears to be setting a higher standard—or at least a different one—for receiving a payment than it is for ensuring that responsive records reach the requester.”

Not every FOIA request involving NASA has been kicked to the curb. Documents acquired by ProPublica this week revealed that the Trump administration has installed “political minders” overseeing at least 16 federal agencies, including NASA. Their goal, according to a Washington Post report, is to act “as a go-between on policy matters” and monitor the “loyalty” of top staff to ensure they “don’t stray too far from the White House’s talking points.”

In a letter to the Daily Dot, MuckRock founder Michael Morisy on Tuesday said that his organization does whatever it can to work with agencies, “as long as we believe it’s in the best interest of the requester and greater transparency.”

“Occasionally, agencies put up unnecessary hurdles to records requesters,” he said. “In a number of states, some agencies can require requests come from citizens of that state, and they’ve instituted a demand for a driver’s license. For a while, the Department of Homeland Security put up a ban on accepting requests from P.O. Boxes, justifying that under national security grounds (that order was later rescinded).”

Morisy said the ultimate impact of these roadblocks—which he says he doesn’t believe “come from a malicious place”—“decrease access and build walls between the public and information that, under law, belongs to them.”

“In NASA’s case, my understanding is that they’re worried about requesters racking up huge fees and then, apparently, absconding with copies of public records that they didn’t pay for,” continued Morisy. “I’m not sure why NASA is the only agency that has this problem. There’s a simple solution: When it looks like fees will be assessed, simply ask for prepayment. That solution works for the 98 other agencies as well as thousands of other agencies at the state and local level.”

The largest issue, he adds, is the perception painted by FOIA critics that the law is a financial burden on taxpayers. In reality, Morisy says, “FOIA programs across the board cost less than $500 million a year—the cost of less than half a dozen F-35s, and a bargain in terms of the accountability and efficiency strong watchdogs offer the government in return.”

Adam Marshall, an attorney at the Reporters Committee for Freedom of the Press, said that FOIA requests are required to follow agency guidelines, but those regulations cannot contradict the law. “When it comes to providing contact information in a request, those obviously exist so the agency can get in touch with the requester if needed and to send them responsive records,” he told the Daily Dot.

“As long as an agency can get in touch with the requester, especially when they are reporters, I don’t understand why an agency would enforce this type of technicality,” added Marshall. “I’m not aware of wide swaths of news organizations and reporters refusing to pay FOIA fees.”

On Friday, a NASA spokesman expressed disbelief over the ongoing dispute, asserting that a search for the records described by the Daily Dot shouldn’t find anything. NASA did not, he said, “receive any orders from the White House” concerning its social media accounts or communications with the news media. While there’s no indication to think otherwise, the law requires NASA to perform a thorough search of its records anyway.

Only now, because America’s space agency has decided to reinterpret its own longstanding policies in a way that negatively impacts MuckRock’s members—and because the Daily Dot has refused to go along—that isn’t happening.

NASA did not immediately respond to a request for comment for this story.

Read a full copy of the Daily Dot’s appeal to NASA below.