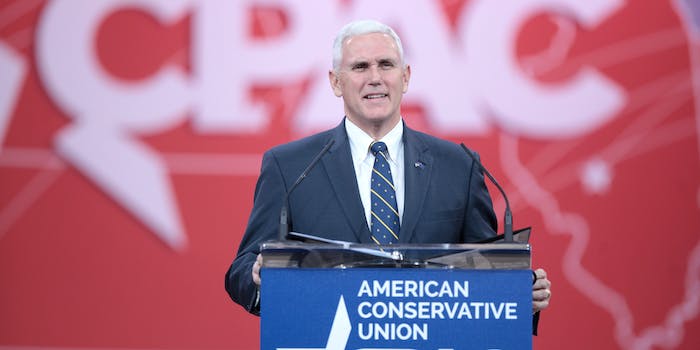 He's a man who doesn't afford the same respect to others.

An old teacher of mine used to ban her students from saying the word “nice.” She called it the “most boring word in the English language.” A notorious firebrand in the guise of a bespectacled 6th-grade language arts professor, she warned that the word was mundane, nondescript, and basically pointless. To describe something as “nice” was as good as not saying anything at all.

Joe Biden should have taken Ms. Fernbacher’s advice: by not saying anything at all.

This week the former vice president and seemingly inevitable presidential nominee broke Gay Twitter by calling his successor, Mike Pence, a “decent guy” during a speech at the University of Omaha. It’s not quite as ghastly as the dreaded “nice,” but use “decent” to describe just about any other activity and it reveals the word’s utter emptiness: a $400 meal at a three-star Michelin restaurant, anniversary sex with your partner, or a trip to Puerto Vallarta. The praise doesn’t sound nearly so flattering.

Biden’s would-be competition in 2020, Pete Buttigieg, did run afoul of the Fernbacher Edict, however. The South Bend, Indiana mayor—who is just the second gay man to ever run for commander-in-chief—told the Washington Blade two years ago that Pence is a “super nice guy” who just so happens to occupy “a different reality than the rest of us.”

With all due respect to our maybe future gay president, that’s like saying Hitler was a great hugger.

If “decent” implies moral fortitude and “nice” suggests kindness, Pence is neither of those things. He is an off-the-rack zealot who ascended to the second-highest office in the country by yoking himself to a man whose skin is the hues of the burning fires of hell—a racist, barely literate demagogue accused of sexually assaulting two dozen women who was dumb enough to admit it on tape to a D-list Bush family member.

And what’s most damning is that the public actually prefers the leadership of a man who is literally the “worst president in history” to this so-called swell fellow. The only thing worse than a Trump White House is Overlord Pence.

Pence may seem genial enough if you’re both wealthy, white men forced to engage in polite chit-chat once a year when you both wind up on the guest list for a billionaire megadonor’s nephew’s bris. But to LGBTQ people singled out by his uniquely destructive policies, Pence is a square-jawed doomsday missile with a mommy complex and a cheap haircut.

The vice president’s anti-LGBTQ record is so extensive that it could have its own Union Square Metronome. Pence has argued hate crimes bills further a “radical social agenda” and “silence” people of faith. He believes that allowing gay people to serve in the military is “social experimentation.” He thinks nondiscrimination laws declare “war on freedom and religion” and “ban employees from having a Bible at the workplace.” He also says being LGBTQ is a “chosen lifestyle” which will bring about “societal collapse.”

When his wife, Karen, was criticized for teaching at a university that bars LGBTQ students from enrolling and compares homosexuality to polygamy, adultery, and sexual abuse, Pence claimed the blowback was proof “freedom of religion is under attack” in America.

It is not merely what Trump’s second-in-command says that’s the issue, though. It is also what he does. As the governor of Indiana, Pence signed a law allowing people of faith to discriminate against members of the LGBTQ community in the name of “religious liberty.” He supported a constitutional amendment limiting same-sex marriages in the Hoosier State as recently as 2014. His policies even fueled an HIV outbreak in Indiana. His tenure as vice president has been more of the same. Pence reportedly was a key supporter of Trump’s directive banning transgender people from serving openly in the U.S. armed forces.

Pence’s defining moment, however, dates back to 2000—when language printed on his campaign website suggested Pence supports anti-gay conversion therapy. His office denied that characterization, saying he meant to encourage safer sex practices. However, Pence has never officially condemned the discredited “pray the gay away” treatment—or even clarified what his stance on the issue is, exactly.

That’s right: A man who is one heartbeat away from the presidency won’t say that electrocuting LGBTQ kids to make them straight is bad.

Biden has since apologized for his admittedly faint praise after former New York gubernatorial candidate Cynthia Nixon called attention to the absurdity of commending Pence’s alleged good manners. In a tweet, he claimed the remarks were intended to make a “point in a foreign policy context,” instead of serving as an endorsement of Pence as a human being.

While Biden will likely continue to pivot from the gaffe as he ramps up for the presidential campaign we all know he’s going to declare, his statement reflects a bizarre tendency to judge our elected leaders not by the communities they harm but by their cult of personality. Americans elected (and then re-elected) a trust fund president who paid his friends to destabilize the Middle East because they wanted to have a beer with him. Two years ago,b voters said “sure, why not?” to a con artist who cozies up to Russian dictators because they just didn’t “trust” a stiff female bureaucrat with an amorphous regional accent.

Biden’s defense of Pence isn’t beside the point. Our reflexive willingness to excuse the actions of bad men when we happen to like them—or conversely, when they discriminate against the people we dislike—is the point.

Pence very well could be a pleasant individual, if the standard for agreeability these days is not murdering people in cold blood. But as a queer person who feels the heavy weight of the vice president’s supposed decency every day I try to live my life under an administration that doesn’t want me to exist, I have some other words I could use to describe him.

None of them, I can assure you, are all that nice.