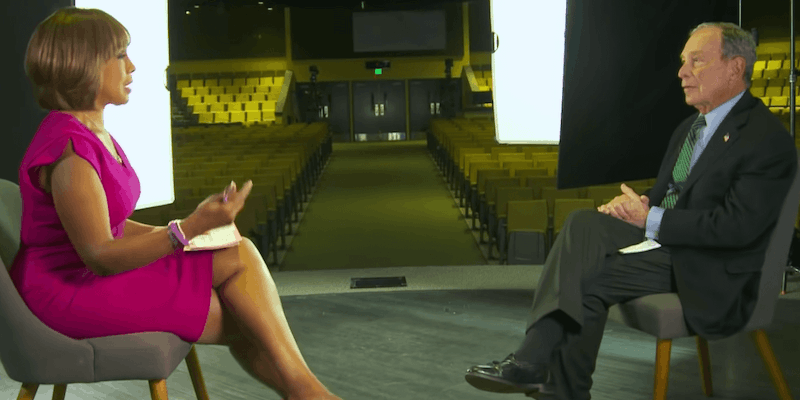 Bloomberg on diversity in 2020 race: ‘Don’t complain to me’

Bloomberg faceplanted on stop-and-frisk and other questions.

“Nobody asked me about it until I started running for president, so, come on.”

Former New York City mayor, media billionaire, and current longshot presidential candidate Michael Bloomberg told CBS This Morning’s Gayle King that he was never asked about “stop-and-frisk,” the controversial policing policy that involves temporarily detaining, questioning, and at times searching civilians on the street for weapons and other contraband, in an interview Friday morning.

The conversation with King marked the first interview Bloomberg has given since declaring his run for president, and the reception was largely negative. Though a number of statements he made drew ire online, his comment about stop-and-frisk proved the most controversial.

Critics of stop-and-frisk said from the beginning that policy would disproportionately impact people of color, younger men, and would be ineffective. In 2017, 90% of those stopped were African-American or Latino, most were aged 18-24, and at least 70% of those stopped were innocent. Protest against the policy was constant during Bloomberg’s mayoral administration.

Former NYC Mayor @MikeBloomberg tells @GayleKing "nobody asked" him about stop & frisk until he started running for president.

"I'm sorry. I apologize. Let's go fight the NRA and find other ways to stop the murders and incarceration. Those are things that I'm committed to do." pic.twitter.com/ww1pJPraBt

Journalists were quick to point out that, in fact, Bloomberg had been asked about stop-and-frisk many times before.

Nobody asked you until you started running for president?! WTH are you talking about?! #BoyBye https://t.co/gSDF7wkE6y

here’s Bloomberg claiming nobody ever asked him about stop and frisk until he ran for president. what a fucking liar https://t.co/V6lANby0uA

New York City, and Michael Bloomberg himself, was repeatedly sued because of his racist stop and frisk policy.

I know of at least 125 widely covered protests that happened because of his stop and frisk policy.

I know people who confronted him to his face about it.

Though Bloomberg’s weak explanation on stop-and-frisk was the worst-received moment of the interview, there were other gaffes and missteps in a wide-ranging conversation that made the former mayor and billionaire seem dismissive and cavalier.

At one point, Bloomberg attempted to paint his wealth as a positive for his campaign. “I turn and they’re criticizing me for [my wealth],” he said. “They had a chance to go out and make a lot of money. And how much of their own money do they put into their campaigns?”

“I’m doing exactly the same thing they’re doing, except that I am using my own money,” he continued, referencing other candidates who are not billionaires. “They’re using somebody else’s money and those other people expect something from them. Nobody gives you money if they don’t expect something. And I don’t want to be bought.”

Bloomberg also ventured into problematic territory when he called Sen. Cory Booker (D-N.J.) “very well-spoken” during the interview. When discussing diverse candidates who have left the race, he said, “You had a lot of diversity in the candidates, some of whom were very competent…”

When asked about the lack of diversity remaining in the field of Democratic candidates, Bloomberg said, “If you wanted to enter and run for president of the United States, you could have done that. But don’t complain to me that you’re not in the race. It was up to you. I thought there was a lot of diversity in the group of Democratic aspirants. Entry is not a barrier.”

Two billionaires are currently in the race while other candidates with greater support have dropped out. The president is also a billionaire.

Bloomberg had hoped to gain traction for his expansive gun control proposal during the sit-down. He released his gun platform on Thursday, the day before the interview. The billionaire’s gaffes overshadowed that aim and the only soundbite about guns that gained any attention was a small part of his attempted apology for stop-and-frisk.