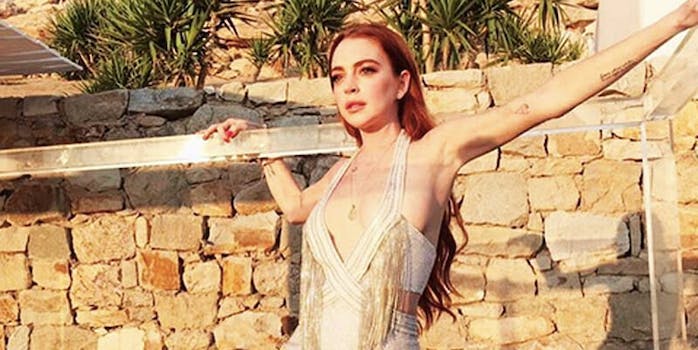 A few years back Lindsay Lohan made the decision to stop terrorizing the United States and has since been living her best life abroad—where she is currently the entrepreneur of three actually successful nightclubs in Greece. But because a former child star can’t change its freckles, Lohan has once again found herself at the center of controversy.

Early Saturday morning, Lohan posted an Instagram Story of herself nobly trying to “rescue” a couple of homeless Syrian refugee children from trafficking. It’s unclear where exactly the video was shot, however, internet sleuths are pointing to Moscow based on previous updates.

Except, as it turns out, the children weren’t being trafficked, but accompanied by their parents and the “rescue” was actually tantamount to attempted kidnapping until the mother of the children punched her in the face. Hey, let those who have never almost accidentally kidnapped some kids throw the first stone!

what is happening… lindsay lohan tried to kidnap two refugee children because she thought the mom was trafficking her children she then was punched by the mother wow… pic.twitter.com/WYvchUqVNh

In the clip above, Lohan can be seen following the family along a street and trying to lure the two boys into her car. “No, you’re going the wrong way, my car is here,” she tells them. She then says something in Arabic, and that she won’t leave until she takes them.

As she continues to follow the family in the disturbing video, she tells them not to “fuck with” her, accusing them of “ruining Arab culture.” Lohan has danced around Islam, but as far as we know has not yet officially converted.

After about a minute or so of following them, she finally attempts to grab one boy’s hand and the mother yells something and it’s apparent that a scuffle takes place. As the family runs off, Lohan screams. “I’m like, in shock right now,” she says, turning the camera around on herself, before starting to sob.

Prior to the above clip—either in the same Instagram Story or a different one—Lohan apparently offers to put the family up in a hotel and asks the boys if they want to watch movies. “It would be so cool to watch a movie on a TV or a computer,” she tells them.