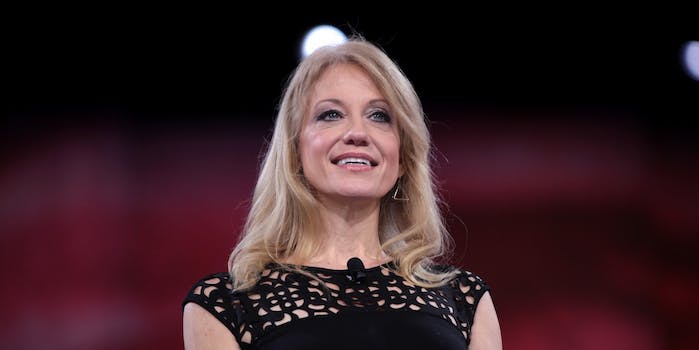 White House counselor Kellyanne Conway on Sunday joined fellow Republicans in addressing accused Alabama Senate candidate Roy Moore by encasing her condemnation of him in a key phrase: “if true.” But she also chose to go a step further.

“I said very early in this process that the conduct as described should disqualify anyone from serving in public office, and I’ll stand by that,” Conway told ABC News’ This Week host Martha Raddatz. “The president and others in the Republican Party have made clear that if the allegations are true, this man should step aside.”

On Thursday, the Washington Post released a deeply sourced report alleging that Moore, while in his early 30s, sexually pursued at least two women between the ages of 16 and 18 and molested a 14-year-old girl. Moore has flatly and vociferously denied the allegations and claims they are politically motivated.

Raddatz pressed the point, asking Conway to get specific about what evidence she’d need to believe one of Moore’s accusers, Leigh Corfman, and whether she had any doubts about the veracity of her story.

“Let me ask you again,” Raddatz said. “Do you have any doubt about the veracity of the accusations?”

“I take this seriously, I’ve tried to be a very loud voice for a very long time against this type of sexual impropriety,” Conway replied. “I know what I read, I don’t know the accusers, and I don’t know Judge Moore. But I also want to make sure that we as a nation are not always prosecuting people through the press.”

Raddatz pressed yet again for a clear, direct answer on whether Conway believed Moore’s accuser, but it eventually became clear that she would provide one.

“Let me ask you one more question on this,” Raddatz said. “Do you believe Leigh Corfman?”

“I don’t know Leigh Corfman,” Conway said. “I believe that both sides are alleging different things. You’re asking me—”

“So that means it goes nowhere,” Raddatz interjected.

“No, that’s not true, that is not true,” Conway replied. “But you’re also asking on behalf of the White House and the president to make a judgment about something while he’s on a 13-day trip, and spoke very explicitly, as have the vice president, as have I, and as have other top advisers.”

“Let me say it one last time,” Conway continued. “The conduct as described is not just offensive, and disgusting, it disqualifies anyone who’s done it from holding public office. So let me go a little step farther: If there’s anyone currently in public office who has behaved that way, to any girl or any woman, maybe they should step aside. Because in a country of 330 million people, we ought to be able to do better than this.”

After having asked Conway about the veracity of the accusations against Moore three separate times, Raddatz gave up.

“You can’t say whether you believe the accusers or not, you just can’t, you’re not going to go that far,” Raddatz concluded.

Conway, who managed President Donald Trump’s campaign last year before joining his administration in January, has come under fire in the past for her dismissive attitude toward the allegations against her own boss. In the final weeks of the 2016 presidential race, more than a dozen women publicly accused Trump of varying forms of sexual predation, the very sort of behavior he was heard bragging about on the infamous Access Hollywood tape.

At the time, Conway dismissed the allegations, and during an event speaking to high schoolers during the presidential transition, she criticized a student who asked about them, accusing her of “[using] sexual assault to try to make news.” Trump has denied all the allegations against him, referring to his accusers as “horrible, horrible liars.”