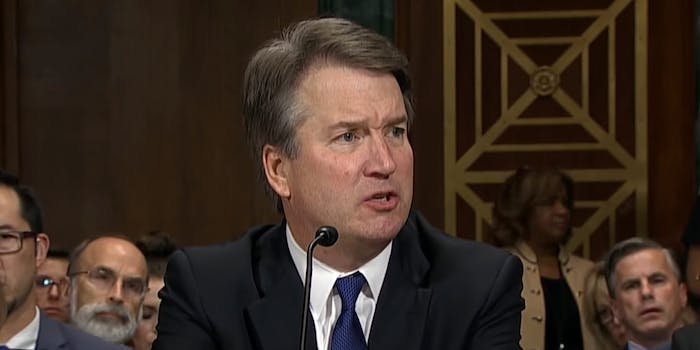 The Electronic Privacy Information Center filed suit for the documents in September.

On Thursday, the Electronic Privacy Information Center (EPIC) revealed that U.S. National Archives and Record Administration (NARA) had identified thousands of records related to Supreme Court Justice Brett Kavanaugh’s involvement with a variety of surveillance systems, which will be released.

The suit argues that NARA failed to make a timely decision regarding the release of the records, particularly given concern that there were thousands of records not made available to the Senate Judiciary Committee before Kavanaugh’s confirmation hearings.

“Even though NARA was treating it as an expedited request,” there wasn’t sufficient action to release the records, EPIC senior counsel Alan Butler told the Daily Dot.

EPIC was particularly concerned with emails Kavanaugh sent to or regarding John Yoo, the Deputy Assistant Attorney General under George W. Bush, who Butler called “the architect of the warrantless wiretapping program.”

One of those emails, from between Sept. 2001 and Feb. 2002 had been made public. EPIC’s suit revealed that there were actually 11 emails fitting that description sent during that period. There were also 183 emails to or regarding Brett Kavanaugh from John Yoo.

The documents haven’t been released to EPIC yet, so what’s contained in the emails is yet to be seen.

“For us, the most important thing is to make these documents public to make sure the public’s aware of what’s in them,” stressed Butler.

Kavanaugh’s history on surveillance is sketchy at best; during his confirmation hearings, Sen. Patrick Leahy (D-Vt.) pressed Kavanaugh on his 2015 decision in a challenge to the NSA’s mass surveillance program. Kavanaugh shoved off Leahy’s questions, saying he was only supporting the precedent that phone records are the property of phone companies, not the people making the calls.

“I’d say his record so far is quite far in the government camp on these issues,” compared to other justices, said Butler.

According to Sen. Leahy’s office, the result of EPIC’s suit is telling.

“This highlights how little we knew about Judge Kavanaugh’s record before voting on his nomination,” Leahy’s office told the Daily Dot. “The fact that he appears to have had so many conversations about warrantless wiretapping when he denied, under oath, seeing anything related to President Bush’s warrantless wiretapping program raises even more questions. If this process were designed to find the truth we would have answered those questions before we rushed to a vote with decades-long consequences.”