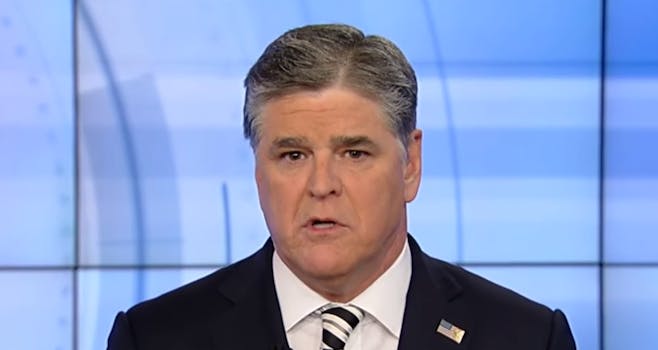 As advertisers flee from far-right Fox News host Sean Hannity over his defense of Roy Moore, Alabama’s Republican nominee for the U.S. Senate who stands accused of child sex assault, Hannity fans have found a bizarre way of showing their support: Smashing their own stuff.

So far, as CNBC detailed Sunday, at least five brands will stop advertising on Hannity: Keurig, 23 and Me, Realtor.com, Nature’s Bounty, and Eloquii. This has inflamed Hannity’s fans on Twitter, who’ve been calling for nationwide boycotts of those companies in retaliation. In particular, they’re targeting Keurig, a company that produces home coffee makers.

Donna, thank you for your concern and for bringing this to our attention. We worked with our media partner and FOX news to stop our ad from airing during the Sean Hannity Show.

In a nutshell, a lot of Hannity fans are supposedly boycotting Keurig now—and even replacing or destroying ones they already own—in order to show their sharp displeasure with the company’s decision to abandon the Fox News firebrand.

Caving to the left BS will cause your profits to cave. #BoycottKeurig low Christmas sales for you! I replace with @NinjaCoffeeBar pic.twitter.com/zqPIIVv0pj

You don't even have to #BreakYourKeurig.. just use it for a month and let it take care of itself. @Keurig @seanhannity #StandWithHannity #Hannity #BoycottKeurig pic.twitter.com/oLdZtrTg8C

Here is my destroyed Keurig. I didn't Video it, but evidence of it's demise is clear.

Of course, the Keurig boycott attempt has also been met with some derision and mockery by progressives on social media, with some clearly pleased that more companies are running away from the controversial right-wing host.

— the supreme court will destroy everything we want (@SeanMcElwee) November 12, 2017

The current rush of companies pulling ads from Hannity’s show is related to his recent commentary on the sexual misconduct allegations against Moore, currently running for U.S. Senate as a Republican against Democratic challenger Doug Jones.

Moore, 70, has been publicly accused in a deeply sourced report from the Washington Post of having sexually pursued multiple teenage girls while in his early 30s, including a particularly detailed allegation that he molested a 14-year-old. In covering the allegations, Hannity―along with one of his guests, attorney Mercedes Colwin―questioned the motives of Moore’s accuser, speculating that she might have been lying and that she might be doing so for money.

Hannity also advised his viewers and listeners not to “rush to judgment” about the allegations and speculated that Moore’s alleged contact with teenagers could’ve been consensual. He later apologized, stating that he was only talking about his three accusers aged 16 to 18, not the 14-year-old.