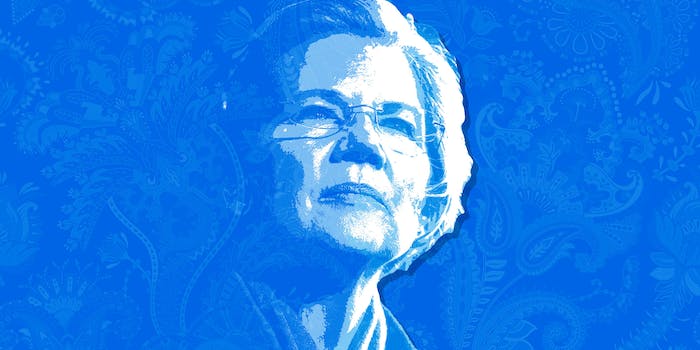 Elizabeth Warren hopes policy will set her apart in 2020

Sen. Elizabeth Warren (D-Mass.) kicked off the 2020 election in December when she became the first person to announce her intention to run for president. But once one of the rising stars of the Democratic party, the senior senator from Massachusetts and former face of the Consumer Financial Protection Bureau has taken a back seat to newer, fresher candidates.

The Harvard law professor became a contentious figure after it was revealed that she claimed Native American heritage during the college admissions process and throughout her legal career; a subsequent DNA test was rebuked by the Cherokee Nation. Warren’s reputation as a policy wonk and association with establishment Democrats has done no favors for her likability.

Some critics still consider Warren too liberal and standoffish for the national stage. Others doubt her ability to resonate with Black voters or white, working-class voters.

But Warren’s campaign has pushed several bold and ambitious policy ideas to elevate her above other 2020 candidates, such as eliminating the tech giants’ monopoly and abolishing the Electoral College. In fact, Warren might be the candidate who is running the most on substance over style. After all, the unapologetically anti-Wall Street, pro-transparency message of Warren’s early years made her popular with voters.

While she hasn’t fleshed out all of her policies yet, here’s what we know about the Elizabeth Warren 2020 platform so far.

Warren wants to break up the giants of the tech industry with an ambitious proposal that would bar them from forming anti-competitive mergers or competing on their own platforms.

Huge companies that earn more than $25 billion in revenue per year and offer an online marketplace, exchange, or platform for connecting third parties—such as Google and Amazon—would be barred from owning the “participants” on the platform.

As Warren explained in a Medium post, this policy would split up Amazon and Amazon Marketplace, Google and its ad exchange, Google and Google search, and similar ventures. Warren would also appoint regulators to break up anticompetitive tech mergers, such as Amazon and Whole Foods, Facebook and WhatsApp, and Google and Nest.

While privacy critics love Warren’s proposal, antitrust experts aren’t sure it will work. It goes without saying that tech giants will likely do everything they can to kill the idea.

Warren has voiced support for the Green New Deal, the sweeping climate and energy stimulus package that includes a refresh of many Obama-era ideas, such as raised emission standards and tax credits for electric cars.

A Senate aide told Axios back in January: “Senator Warren has been a longtime advocate of aggressively addressing climate change and shifting toward renewables, and supports the idea of a Green New Deal to ambitiously tackle our climate crisis, economic inequality, and racial injustice.”

Warren joins others in her party by supporting Medicare for All, a national, single-payer healthcare system that would do away with private health insurance. Warren co-sponsored a bill by Sen. Bernie Sanders (I-VT) that would provide free healthcare to all U.S. residents and require the federal government to regulate healthcare prices.

She has, however, been accused of incrementalism on Medicare for All, as she supports a number of different policy paths to universal coverage.

In her recent CNN Town Hall, Warren said, “When we talk about Medicare for All, there are a lot of different pathways. What we’re all looking for is the lowest-cost way to make sure that everybody gets covered.”

Warren has proposed a 3% tax on billionaires that she estimates would raise $2.75 trillion over a decade and go toward subsidizing childcare, student debt, and healthcare. “We are now in an America where one-tenth of 1% has about the same wealth as 90% of America,” Warren said in an appearance on MSNBC. “And here’s the deal: 40% of America today can’t come up with 400 bucks in an emergency. That is not an economy that is sustainable, and it’s not a democracy that’s sustainable.”

Warren became one of the first 2020 Democrats to propose abolishing the Electoral College.

Warren’s universal childcare plan would create a system of government-regulated and subsidized childcare facilities for those who are too young to attend preschool. Tuition would be offered on a sliding scale. Warren’s plan would give grants to states, cities, non-profits, and schools in order to create a network of childcare options for every family.

Warren hopes to expand access to affordable housing by adding an estimated $450 billion dollars to the National Housing Trust Fund over the course of the next decade.

A bill authored by Warren includes investments in rural and tribal housing, incentives for local governments to remove zoning barriers that drive up housing costs, and an expansion of the Fair Housing Act to ban discrimination on the basis of sexual orientation, gender identity, veteran status, marital status, and source of income.

Warren has backed reparations, or payments to descendants of slaves. In her CNN Town Hall, Warren endorsed a House bill to create a commission that would study options for providing reparations to Black Americans descended from slaves.

“We must confront the dark history of slavery and government-sanctioned discrimination in this country that has had many consequences including undermining the ability of Black families to build wealth in America for generations,” Warren said in a statement to Reuters.

Throughout the course of her nascent campaign, Warren has used Medium to expand on her policies, a unique approach that drives home just how focused she is on policy. How this focus will help Elizabeth Warren in 2020 with voters, who are often swayed by more trivial factors, remains to be seen.

In late April, Warren announced a plan that would cancel up to $50,000 in student loan debt for 42 million Americans and make two- and four-year public college tuition free.

“Once we’ve cleared out the debt that’s holding down an entire generation of Americans, we must ensure that we never have another student debt crisis again,” she wrote in a blog post on Medium. “We can do that by recognizing that a public college education is like a public K-12 education — a basic public good that should be available to everyone with free tuition and zero debt at graduation.”

As for the free tuition plan, Warren said the federal government would “partner with states to split the costs of tuition and fees and ensure that states maintain their current levels of funding on need-based financial aid and academic instruction.”

The plan also calls for ways to address the higher education system to better serve communities of color by creating a fund for historically Black colleges and universities and make federal funding available to states that “demonstrate substantial improvement in enrollment and graduation rates for lower-income students and students of color,” among other things.