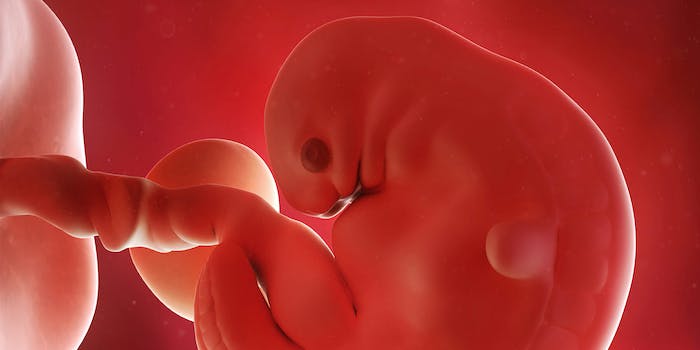 If you're trying to make a point, maybe don't use computer-generated art.

Conservative news host Liz Wheeler struck out at Alexandria Ocasio-Cortez on Twitter earlier this week over Georgia’s “heartbeat bill,” and it did not go so well for her.

The new law will outlaw abortion after a heartbeat is detectable in the fetus—roughly six weeks into a pregnancy.

“‘6 weeks pregnant’ = 2 weeks late on your period,” Ocasio-Cortez wrote, slamming the authors of the bill for not understanding women’s bodies.

Most of the men writing these bills don’t know the first thing about a woman’s body outside of the things they want from it. It’s relatively common for a woman to have a late period + not be pregnant.

So this is a backdoor ban. https://t.co/xWd9GAj51b

Wheeler responded by sharing what she suggested was a photo of a fetus after six weeks of development.

“This is ‘two weeks late on your period.’” she said, referencing a strange red blob.

This is “two weeks late on your period.” Two weeks late has arms & legs forming, fingers & toes, & a heartbeat! pic.twitter.com/5tN7JYxf19

Of course, it wasn’t actually a real photo of a fetus.

Activist Charlotte Clymer pointed out that a simple reverse image search quickly proved that the “photo” was actually nothing more than a computer generated image, a 3D rendering found on a stock image website.

“I would say what you’re doing is dishonest, craven, and dangerous, but you already know that,” Clymer tweeted. “You just don’t care.”

Photo or not, the internet is totally roasting Wheeler for her comments.

“Ah yes the human form that we all know and love,” one user wrote.

Ah yes the human form that we all know and love

We must protect this weird lizard thingy in Jesus’ name!

naw that ain’t no baby, that’s rufus from kim possible

And of course, some burns got a little too real.

This shit fucking cracks me up.

Conservatives: Fingers and toes and a heartbeat! Oh my!

Also Conservatives: Bomb the shit out of those people over there! Their kids? FUCK 'EM! Also, fuck healthcare, food, clean water, climate, education, and not getting shot in your school. https://t.co/aGaFOmXQn5

But the real takeaway from this story? It’s 2019 and there are people in this world who still don’t understand how easily reverse Google image search can be used against them. The horror.