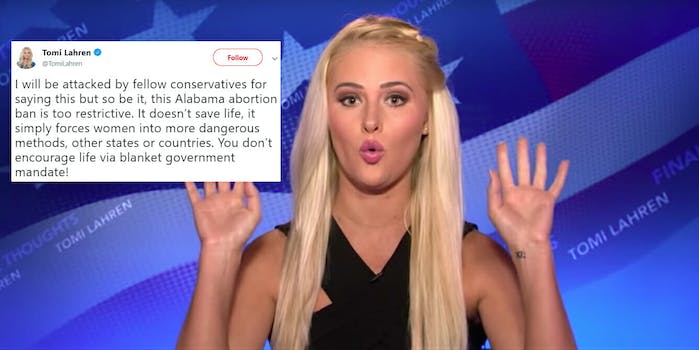 Tomi Lahren says the Alabama abortion ban is ‘too restrictive’

Conservative commentator Tomi Lahren on Thursday tweeted about her opposition to Alabama’s recent ban on abortion. It’s the most severe of the multiple restrictive anti-abortion laws cropping up in state legislatures recently, and Lahren is doubling down on the same sentiments that got her fired from the Blaze in 2017 after openly condemning the Republican Party’s pro-life stance.

“[T]his Alabama abortion ban is too restrictive. It doesn’t save life [sic], it simply forces women into more dangerous methods, other states or countries,” she tweeted Thursday to more than a million followers. “You don’t encourage life via blanket government mandate!”

The legislation goes beyond the prohibitive “heartbeat bills” of other red states. Pending the governor’s signature, the law will outright prohibit abortions, even in the case of rape and incest. Exceptions only apply “to avoid a serious health risk to the unborn child’s mother,” or if the “unborn child has a lethal anomaly.” Doctors who continue to provide abortions outside of these circumstances could face life in prison.

I will be attacked by fellow conservatives for saying this but so be it, this Alabama abortion ban is too restrictive. It doesn’t save life, it simply forces women into more dangerous methods, other states or countries. You don’t encourage life via blanket government mandate!

She also acknowledges that her pro-choice views will no doubt open the floodgates to conservative attacks, much in the same way they did two years ago when she called herself a hypocrite if she were to follow her party’s stance.

While she later clarified she didn’t think other pro-life conservatives were hypocrites, her position on the controversial issue remained firm.

Conservatives were predictably up in arms about the pro-choice sentiment from such a staunch party supporter. After one insulted her IQ and accused her of being “anti-Christian, anti-family, and anti-freedom” in response, Lahren later fired back with another tweet. She said conservatives are fooling themselves if they truly believe an outright ban on abortion will stop the practice. She also added a personal response to that particular commenter: “P.S. you’re not God so don’t you dare evaluate my Christian faith based on your moral superiority complex.”

If you think banning abortion with no exception for rape or incest will stop women from terminating pregnancy, you’re not being honest with yourself.

P.S. you’re not God so don’t you dare evaluate my Christian faith based on your moral superiority complex. https://t.co/TUbRPqudkm

Liberal Twitter was especially surprised by Lahren’s tweets. Many were flabbergasted that for all her frequent pro-right rantings, Lahren was capable of a reasonable viewpoint. Her name began trending on Twitter in a matter of hours.

Did tomi lahren say something right for once or am i in a parallel universe…? https://t.co/LpAHBGsvMa

Pat Robertson, Tomi Lahren, Satan, and a wheelbarrow full of Swastikas are all saying that Alabama’s “heartbeat” law is over the top.

That should tell the assholes in Alabama something.

Many users were not impressed with Lahren’s tweet, however. After all, this is the same person who has also used her platform to compare the Black Lives Matter movement to the KKK, mock the student responsible for the March for Our Lives protest, and call migrants getting tear-gassed the “highlight” of her Thanksgiving. White liberals were particularly side-eyed in the matter for praising Lahren’s one sensible view among many, many terrible ones.

who's gonna break it to all these woke progressive liberals who have completely forgiven Tomi Lahren's evil and racist past because she tweeted one tiny thing they agree with that Hitler was a vegetarian?

Tomi Lahren saying something reasonable for once doesn't all of a sudden make her a hero. she STILL a racist. pic.twitter.com/WBlCy4lG0r