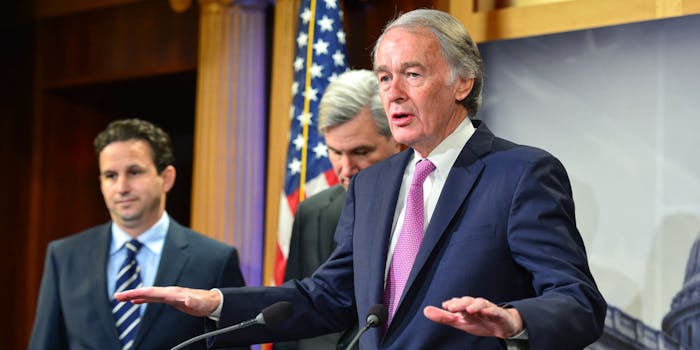 The senator was concerned with recent reports about the controversial company.

Sen. Edward Markey (D-Mass.) is asking Clearview AI, the company that created a facial recognition app that can be used with its massive database of scraped photos from social media sites, about its relationships with foreign countries and whether it is collecting images of children.

The Massachusetts senator, who has previously probed the controversial company, sent a letter to Clearview CEO Hoan Ton-That on Tuesday highlighting that a recent BuzzFeed News report that said a client list showed it had expanded to at least 26 countries, including Saudi Arabia.

“The use of sophisticated facial recognition technology is concerning even in a democracy with strong civil liberties, but its export to certain foreign countries could enable mass surveillance and repression of minorities,” Markey wrote.

“Contrary to your claim that Clearview is ‘like other companies who operate facial recognition software,’ Clearview is a clear outlier: it scrapes billions of photos from social media sites rather than using relatively limited sets of photos from existing government databases. This is why I am particularly worried that foreign sales of your technology might exacerbate the global trend toward mass surveillance and human rights suppression.”

In the letter, Markey also questions whether Clearview “indiscriminately collected and processed images of children under 13” as part of its social media photo scraping. The senator added that if Clearview did, it would be in violation of the Children’s Online Privacy Protection Act.

As part of the letter, Markey asks the company to answer a number of questions including: if it plans to sell its technology outside of the United States and if so, to whom; actions it has taken to remain in compliance with the Children’s Online Privacy Protection Act; what data or metadata it collects; and if it would allow people a way to delete their images from its database without giving them a headshot and government ID, as it currently requires; among other things.

Clearview AI has faced a torrent of criticism in recent months, with several social media sites demanding that it stop scraping photos from their platforms and a number of lawsuits being filed against it—including one in Illinois that aims to become a class-action suit.

In January, Markey had asked Clearview about the company’s relationship with law enforcement and received a response a few days later. The senator on Tuesday called the company’s response to his questions “unacceptable.”