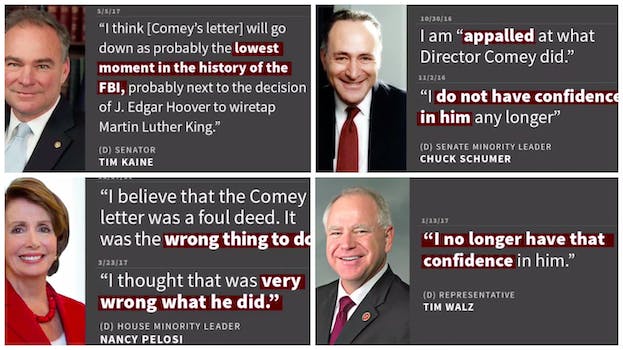 The video features clips of Bernie Sanders and Nancy Pelosi, among others.

If there’s one thing President Donald Trump loves, it’s pointing out how hypocritical politicians are. If there’s another thing he also loves, it’s dropping low-grade videos on Twitter. His firing of James Comey gave him the perfect opportunity to do both.

Last night, he posted a video showing a bevy of Democrats calling for James Comey to be fired. It begins by rhetorically asking “Democrats, what changed?’ before compiling news segments and quotes from Bernie Sanders, Chuck Schumer, Nancy Pelosi and others questioning Comey’s ability to lead the FBI.

Come for the rousing score at the two-minute mark but stay for the official Drain the Swamp logo.

The Democrats should be ashamed. This is a disgrace!#DrainTheSwamp pic.twitter.com/UfbKEECm2V

Trump does have a point. Over the summer and into the fall, Democrats were up in arms about Comey’s handling of the Hillary Clinton email scandal, to the point where they said that he lost the trust of the American people. That is, ostensibly, why Trump fired him.

Naturally, though, Democrats don’t believe Trump’s rationale for firing Comey. His critics believe he did it to send a message to the Bureau about investigating his campaign and administration’s ties to Russia.

Who knows the truth? I’m just here for a two-year-long slogan finally getting three minutes of design work.

What’s lurking behind the bushes???

Also, is that even what a swamp looks like? I’m not so sure.