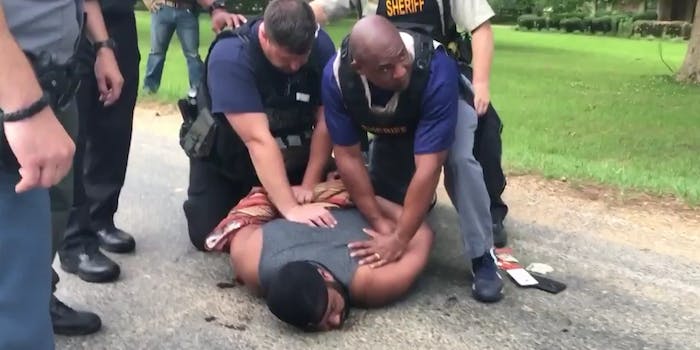 This article contains content that could be disturbing to some readers.

A man suspected of killing eight people in Lincoln County, Mississippi on Saturday night, including a police deputy, has been apprehended by law enforcement. The man, Cory Godbolt, spoke about the alleged killings and his subsequent arrest to Therese Apel of the Jackson Clarion-Ledger while handcuffed on the ground on Sunday.

In the process of doing so, he insisted that he’d intended to commit suicide-by-police, and he said that “death” is what’s in his future.

“Suicide-by-cop was my intention,” Godbolt said. “I ain’t fit to live, not after what I’ve done. Not in y’all’s eyes, and not in nobody else’s eyes.”

The Clarion-Ledger footage of Godbolt’s curbside confession is embedded below, but be forewarned, it’s disturbing.

Suspect tells me Lincoln Co. deputy was just in the way, and after all this he meant to commit suicide by cop. pic.twitter.com/ZebieSQkdR

No victims besides the slain police deputy, 36-year-old William Durr, have yet been identified. Godbolt seemingly denied intending to kill Durr.

“My pain wasn’t designed for him,” Godbolt said. “He was just there.”

While no motive has yet been offered for the killings, Godbolt’s statement suggests the police were called in the midst of an argument or conflict between he and his wife about “taking [his] children home.”