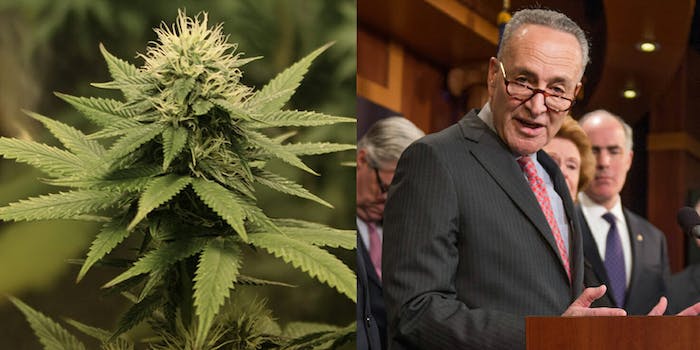 That's one way to celebrate.

Senate Minority Leader Chuck Schumer (D-N.Y.) is expected to celebrate 4/20–but not in the traditional way.

The Democratic senator plans to introduce a bill on Friday that would decriminalize marijuana on the federal level by removing it from the list of scheduled substances, according to reports.

Speaking with Vice News, Schumer said that decriminalization was the “right thing to do.”

“If smoking marijuana doesn’t hurt anybody else, why shouldn’t we allow people to do it and not make it criminal?” he told the news outlet.

Schumer said the legislation was “long overdue” and lamented how marijuana laws affect “communities of color disproportionately and unfairly.”

The bill would also create funding for minority and women-owned businesses in the marijuana industry and allow the federal government to regulate pot-related advertising in much the same way it does with alcohol and tobacco, according to the report.

Sen. Cory Booker (D-N.J.) has also introduced the “Marijuana Justice Act,” which would take pot off the list of scheduled substances and allow for marijuana-related offenses to be expunged from criminal records.

While there does seem to be a shift on marijuana views in higher levels of government–former House Speaker John Boehner recently joined the advisory board of a marijuana firm–there are some hurdles that need to be crossed before bills like Schumer’s and Booker’s become law.

Attorney General Jeff Sessions has said he is opposed to marijuana legalization on multiple occasions and has claimed–incorrectly–that pot is as dangerous as heroin.

It’s also unlikely that the bill will advance since Republicans control both the House of Representatives and the Senate. However, last year, a Gallup poll found that a majority of Republican voters favored marijuana legalization.

Schumer said after seeing the success of marijuana being legalized in several states, he thought it was time to shift laws on a national level. As he explains here.

THREAD: It’s official. Today, I am formally announcing my plan to decriminalize marijuana at the federal level. It’s time we allow states, once and for all, to have the power to decide what works best for them.

I have long believed that states should function as their own laboratories of democracy. My bill is a step in the right direction aimed at removing the barriers to state legalization efforts.

You can read all of Schumer’s interview with Vice News here.