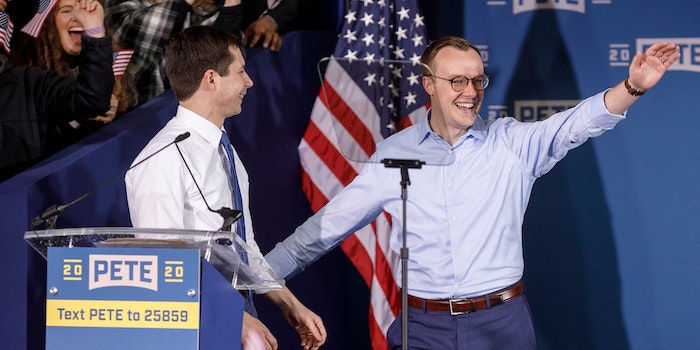 Pete Buttigieg’s airplane got stuck on the runway. So his husband did a Twitter Q&A

You won't hear these questions at the debate.

Presidential candidate Pete Buttigieg and husband Chasten have amassed quite a fan following online. The two frequently use Twitter to connect with voters and share how things are going on the campaign trail. Their dogs Truman and Buddy even have their own Twitter account (@firstdogssb).

The couple was reportedly stuck on the tarmac while traveling Wednesday night and decided to use the time to answer some questions we won’t be hearing at the next presidential debate. They’re pro-Billy Porter and Chasten was star-struck by meeting Cher, writing that “words fail” when asked to describe her.

Of course! But do we deserve @theebillyporter? 😭

Chasten talked about his relationship with Pete, who apparently has not been bowling in at least four years. This begs the question, has Pete Buttigieg ever been bowling?

The last movie they watched is Won’t You Be My Neighbor?, the Mister Rogers documentary.

Gym, walk the dogs, dinner, movie. I like being out and about, but nights alone are so rare that the silence and time home alone is v special.

We watched “Won’t You Be My Neighbor” the other night.

Recently finished “Less” by Andrew Sean Greer and it was delightful

We learned Chasten’s favorite candy is Reese’s (which is the only correct answer), and that he doesn’t understand the orange wine craze.

Pete and Chasten did eventually make it off the tarmac.

On Wednesday evening, the South Bend, Indiana mayor clashed with Beto O’Rourke in Las Vegas about the implementation of a buyback program for firearms, according to the Dallas Morning News. Buttigieg thinks O’Rourke’s plan is impractical and inefficient.