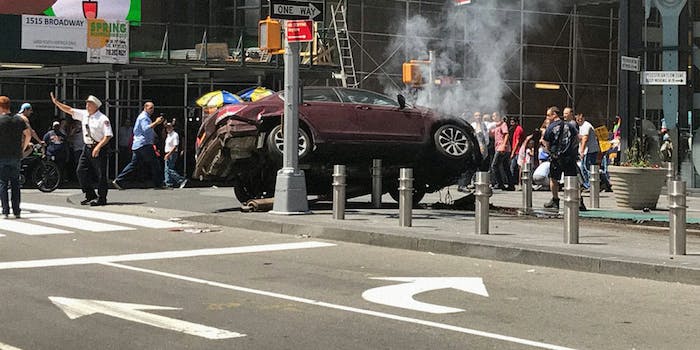 At least 1 dead after car slams into Times Square crowd

Multiple people were injured in the mid-day crash.

A car slammed into a busy sidewalk in Times Square on Thursday, injuring several people and killing at least one.

At least 10 people were injured during the incident, according to various media reports.

Reuters reported at least one person has died because of the accident. At the scene, people were being placed on stretchers and shoes were scattered across the sidewalk, according to the news agency.

What's happening in Times Square?? This car was in the sidewalk and people are on the streets pic.twitter.com/PsepRtfrAr

The vehicle, which was photographed by witnesses at the scene, appears to have jumped a curb and slammed onto the sidewalk.  The sedan appeared to hit the pedestrians at the corner of Seventh Avenue and West 43rd Street around noon on Thursday.

A witness posted an Instagram video of someone appearing to be taken into custody by New York City Police, but it has since been taken down.

People on social media said multiple buildings have been put on lockdown as a result of the incident.

According to CBS, the NYPD is not considering this a terrorist attack.

Times Square has one of the heaviest pedestrian presences in Manhattan. It is unclear what caused the car to slam into crowded sidewalk.

Update 6:28pm CT, May 18: The driver of the car, 26-year-old Richard Rojas, was reportedly high on synthetic marijuana at the time of the crash, according to ABC News.