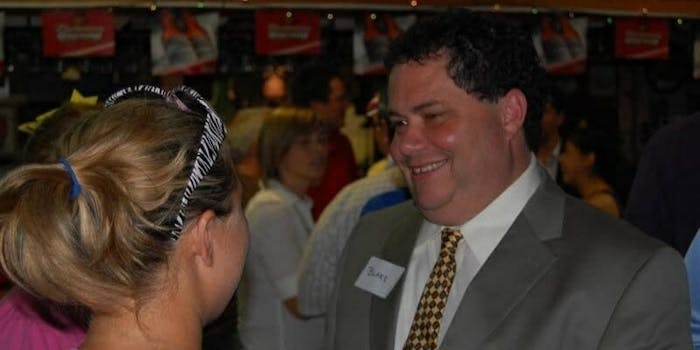 The disgraced former U.S. representative who resigned from his office last year in the wake of sexual harassment allegations knows exactly who to blame. And it’s anybody but himself.

Blake Farenthold, a Republican from Texas, abruptly quit Congress in April after accusations of sexual harassment came to light and it was revealed that he had paid $84,000 in taxpayer money to settle a complaint of a former aide.

In a deposition obtained by the Huffington Post, Farenthold testified earlier this month that his downfall came because of the #MeToo movement and “F-tards.”

Testifying in a deposition after the Victoria, Texas newspaper sued to uncover facts about his new $160,000 per-year job as a lobbyist, Farenthold said the House Ethics Committee that investigated his sexual harassment allegations was driven more by politics than by facts and that he was used a scapegoat because of the #MeToo movement.

“I believe the public attention to the #MeToo movement created a political environment where it would be much more difficult for the members of the Ethics Committee to separate politics from the facts,” he said.

Asked about a text message he sent to a friend after he resigned that said the “f tards won,” Farenthold said he was referring to the media. By resigning, Farenthold also said that he “took a bullet for the team.”

At the time of his resignation, Farenthold promised to pay back the $84,000 he had used to settle the case against his former aide who said Farenthold had told her he had “wet dreams” about her and that she could show her nipples to him. But he quickly changed his mind about the repayment, despite angering Texas Gov. Greg Abbott, also a Republican.

Asked why he reneged on his promise during his deposition, he said it would have been illegal for him to pay back the money. It’s unclear what he meant by that.

He also blamed Rep. Mia Love, a Republican from Utah, for threatening to call for his resignation from Congress.