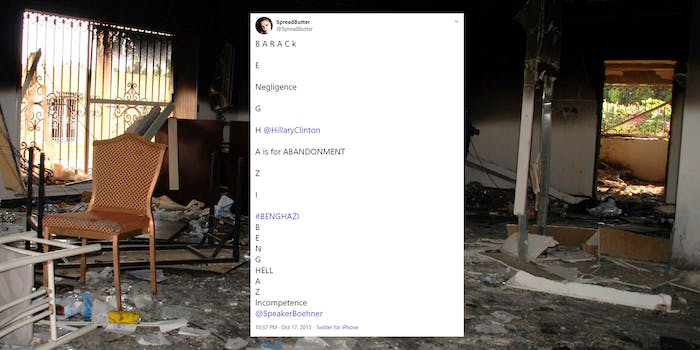 Why Benghazi was the defining political moment of the decade

If it never happened, the world would be a very different place.

Call it irony, coincidence, or the dumb state of purgatory we are in now, perpetually forced to relive different iterations of the same sort of news cycles. Whatever it is, the past 10 years of American politics are once again because of a terrorist act on Sept. 11.

But unlike the one in New York in 2001, the 2012 terrorist attack in Benghazi, Libya, which claimed the lives of four Americans, including a U.S. ambassador, wasn’t an immediately galvanizing moment that changed everything. Instead, it was a four-year trickle of news and events that put us where we are today.

It’s surprising, even, that it lasted beyond the initial news cycle. After all, given how many people die every day in America—to gun violence, to our backward healthcare system, to a crumbling infrastructure—how could four people dying in a foreign country during a military intervention matter at all?

All the deaths of all the U.S. service members in Iraq and Afghanistan haven’t had anywhere near a national impact.

But Benghazi stuck. And if it hadn’t, Donald Trump wouldn’t be president.

In early 2012, the U.S. was at the tail end of a military intervention that saw Muammar Gaddafi brutally murdered, part of a series of “peaceful” uprisings known as the Arab Spring.

During that intervention, the Central Intelligence Agency (CIA) and U.S. special forces built up a presence in Benghazi, a shoreside city on Libya’s northern coast. What they were doing there depends on how conspiratorial you wish to get (collecting arms from the conflict and shipping them to Syria?), but suffice it to say, they were there.

On the night of Sept. 11, 2012, a group of armed al-Qaeda militants charged a diplomatic compound in the city, where Ambassador Chris Stevens was residing. They overran it, killing Stevens and another American. From there, the group of militants moved to a CIA outpost, where they launched an hours-long assault on it, which killed two more.

All the while, Secretary of State Hillary Clinton watched from afar on a video feed, enjoying the assault as she ate her breakfast. Or… probably not? (If there’s one thing Benghazi truly brought into the zeitgeist well before Trump was that it was not necessary to believe facts or truth when they conflicted with your party’s ultimate end goals.)

That probably could have been the end of it, but at the time, protests were underway in cities throughout the Middle East over a video titled Innocence of Muslims and its depictions of the Prophet Muhammad.

In the immediate aftermath of the attacks, the Obama administration decided to attribute the events in Benghazi to the video.

While the Obama administration has insisted that it was just a matter of a miscommunication that led them to blame the video—first in a statement and then on the Sunday news shows—and not an attempt to willfully mislead the public, it cemented one matter that became key to Trump’s popularity and campaign.

The idea that Muslim President Barack Hussein Obama would willingly absolve violent Arabic actors for their behavior, oblivious to or (willfully??) aiding the threat, became one of Trump’s rallying cries in 2016. That belief, accurate or not, was one the then-presidential candidate hollered and hammered home to anyone who’d listen. Trump’s supporters saw his desire to combat “radical Islamic terrorism” as in the stark contrast to the president who had blown off a literal terror attack on the anniversary of 9/11.

Clinton, too, in her first statement after the attack referenced the video. Subsequent emails she sent in the hours after the attack, which were later released, revealed she knew right away it was a terror attack.

At the time, Republicans controlled the House of Representatives and launched five different investigations into the deaths of four Americans (by contrast, the other 9/11 had one congressional investigation). And in the wake of the Tea Party tsunami in 2010, the House was overrun by a wave of right-wingers long obsessed with the guilt of America’s most prominent political family, the Clintons.

They investigated everything from Clinton personally rejecting additional embassy security in the months leading up to the attacks to theories that Clinton ordered “a stand down” order that halted U.S. forces from rescuing troops under siege.

If you’re wondering why Republicans now are furious now over current impeachment proceedings for a “trivial” matter led by rabid, partisan congresspeople, it’s only just because they aren’t the ones doing it. In fact, they practically invented this method to sink a political candidate.

Those five committees found essentially nothing, but in the wake of FOIA requests from a right-wing blog, the House kicked off one more investigation, with the 2016 election looming near.

When the Select Committee on Benghazi was announced, a lot of observers probably thought the intention wasn’t to get at the truth of the matter at Benghazi.

Why? Because Republicans admitted it.

In a September 2015 interview on Fox, now House Minority Leader Kevin McCarthy said, “Everybody thought Hillary Clinton was unbeatable, right? But we put together a Benghazi special committee, a select committee. What are her numbers today? Her numbers are dropping. Why? Because she’s untrustable. But no one would have known any of that had happened, had we not fought.”

Hey, if you can’t beat a candidate, investigate the hell out of him.

Republicans did succeed, though. While investigating the myriad conspiracies cooked up on the dredges of the web, the committee uncovered Clinton’s use of a private email server, and leaked the news to the New York Times, a story the Times would go on to breathlessly cover for several straight years.

The Clintons have always been considered nefarious actors by Republicans, and when it turned out Hillary used an email server in her house for government business, the charge was finally able to stick.

Not only did emails from the committee reveal duplicitousness in her response to the public—which should be noted happens in government all the time and is not the sole provenance of Hillary Clinton—they changed the entire election.

In the general, Trump hammered relentlessly on the private server issue, especially after it came to light that emails which Clinton claimed were personal had been deleted.

A Federal Bureau of Investigation (FBI) into the matter loomed throughout the race, with then-FBI Director James Comey both absolving her and admonishing her in a bizarre press conference in the summer of 2016.

Throughout, Trump supporters gleefully echoed the now-president’s desire to “lock her up,” chanting it at rallies across the nation.

While that represented a populist anger at elites Trump was able to channel and foment, the basis for it was ultimately Clinton circumventing government protocol in a way that could get a lesser employee arrested.

And that all came from a terror attack four years prior in which four people died.

But the political ramifications are only a small part of the story. The event has also had as much cultural cachet as any moment in U.S. history over the past 10 years.

“But her emails” has become the flippant response in the wake of Trump’s election to anything the president had done that Democrats found repugnant, implying that the sin Clinton was sacrificed for in the 2016 pales in comparison to the myriad scandals and dramatic destruction of norms by Trump.

Benghazi also set the stage for bad-faith arguments online to devolve the way they did. While it’s likely discourse on the internet would have collapsed no matter what, over the 2012 election, no matter what Obama or his supporters discussed, a hashtag Benghazi would be thrown back in their faces.

As Obama ran for reelection, despite touting a relatively scandal-free first term, #Benghazi was the kind of dunk tweet from right-wingers that left them thinking they’d successfully won a Twitter argument.

NO ONE LEFT BEHIND? Hmmm…I can think of four who were. #Benghazi

No matter how much the MSM ignores #Benghazi & no matter how hard Obama tries to cover it up- it won't change what happened WE WON'T FORGET!

Just about every way we are politically online at the end of the decade can be traced back to Benghazi. If you enjoy QAnon-style images of major Democrats being shipped off to Gitmo, well, guess where those came from?

But it also helped bring about the memetic way we interpret and analyze politics, all thanks to one particularly trenchant and elongated take on Benghazi.

A is for ABANDONMENT

The Benghazi acrostic meme had lasting cache on Twitter, and it still used today.

It paved the way for a kind of Extremely Online left to neuter and mock conservative rage, showing just about any adamant argument could be depantsed in such a simple way. In a way, the mocking responses to Republican fervor about Benghazi helped create the kind of ironic tonal detachment and sarcasm that permeates all of Twitter today.

But that might not even be the worst of it all.

There is one more long-lasting ramification of this mess. Much in the way Mark Wahlberg came to represent masculine American post 9/11 services—as a special forces operator, as a police officer, as a guy who claimed on radio interviews he could have stopped 9/11—Benghazi also gave us what will be the new face of softer American militaristic man for the 2020s.

You know him as the new Jack Ryan, the CIA’s benevolent face fighting socialism in South America. John Krasinski, once just Jim from the Office but now a troop and a cop all rolled into one, got his action hero career started with a Michael Bay movie about … Benghazi.

Imagine if we ignored the whole thing.