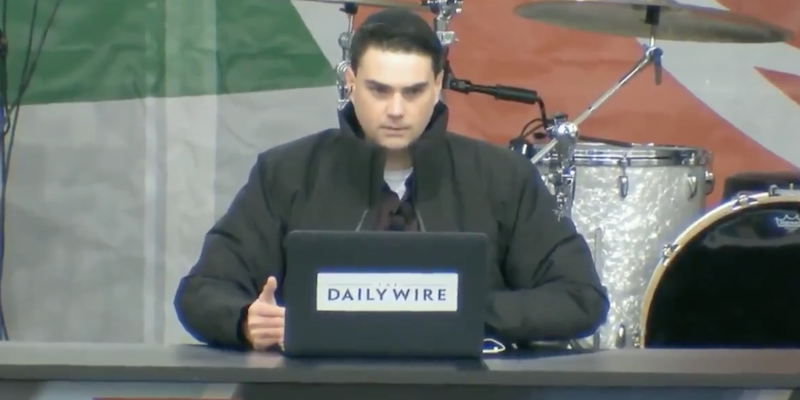 Today marks the forty-sixth anniversary of Roe v. Wade, the landmark case legalizing abortion in the U.S. To mark the occasion, anti-choice forces congregated in the freezing cold in the nation’s capital for the annual March for Life. (Not to be confused with the very, very different March for Our Lives.)

The festivities included such highlights as Ben Shapiro delivering ads for Quip toothbrushes and ZipRecruiter and feeling the inexplicable urge to say, “The truth is no pro-life person would kill baby Hitler. Baby Hitler was a baby.”

Ben Shapiro at March for Life: "The truth is no pro-life person would kill baby Hitler. Baby Hitler was a baby." pic.twitter.com/PPgQcbWSrq

In recognition of the joyous occasion annually marked by people parading about with graphic signs that have been described as “visual terrorism,” Senate Republicans have been out in full force on Twitter expressing solidarity with those who envision a world in which women are forced to carry pregnancies resulting from sexual assault to term, and only rich women can get abortions.

Here’s a sample of tweets:

Iowans, and taxpayers across the country, should not be forced to foot the bill for organizations that disregard human life. Today, I reintroduced legislation to defund Planned Parenthood while protecting vital funding for women’s health care services. https://t.co/NEiyXNoseP

Planned Parenthood does not receive federal funding for abortion services, and defunding it would merely keep impoverished women from receiving reproductive care and mammograms.

As we approach the 46th anniversary of Roe v. Wade, it is always humbling to welcome the many #prolife Kansans who travel to Washington for @March_for_Life to help in our fight to protect life. #whywemarch pic.twitter.com/he2mBh9t4h

Welcome to everyone in town for today’s @March_for_Life! After the march, please stop by my office in the Senate Hart building Room 328 for some Wisconsin-made hot cocoa from 2-4pm. #MarchForLife2019 pic.twitter.com/Bk2NoHXJ2F

All lives have value & worth, including children in the womb. Our nation should focus on valuing children, no matter their size, by protecting life at all stages. #WhyWeMarch LISTEN: https://t.co/xqBMDGQeRf

Eight years into a recovery, with unemployment at historically low levels, 13% of the population is still on food stamps. This is a level of participation normally experienced during recessions and high unemployment.

Today, @USDA released a proposal to reform work requirements for healthy adults w/o children receiving SNAP benefits. SNAP recipients need temporary & supplemental assistance to lift them out of poverty.This is a good step in the right direction for families and people. https://t.co/HM3en4H1xI

Feeding the hungry is so last century, after all.

What we say about the value of human life fundamentally impacts who and what we will be as a nation. In recognition of this, I have reintroduced the Life at Conception Act to ensure the unborn receive equal protection under the law. https://t.co/ZobeItjH2d

It bears mentioning that Sen. Bill Cassidy (R-La.), a doctor, should know that science is far from settled on whether fetuses can experience pain, with the body of evidence indicating that it is not possible until the third trimester, or twenty-seven to twenty-eight weeks of pregnancy.

Cassidy has also recently been pretty pleased with himself for joining the fight against providing Medicare to undocumented residents. People dying of preventable diseases in the United States apparently does not bother the doctor one little bit.

Simple math says you can’t add the entire population of another country to Medicaid and still take care of the American citizens who need it. Compassion that cannot be sustained is not compassion.

Someone should probably tell the senator that all compassion is compassion. But by far the biggest anti-choice tweeter is Sen. Roger Wicker (R-Miss.), who has expressed his dour disapproval for terminating a pregnancy more than a dozen times on Twitter this week alone.

“As each year passes, more and more parents see sonograms.. We see the feet… the heartbeat…the face. We realize as Americans that this is a living human that deserves protection.” #WhyWeMarch #MarchForLife

Today the Senate considered my proposal to bring a permanent end to taxpayer funding for abortion. My full statement ⤵ https://t.co/ZhKwdlYixk pic.twitter.com/pITF90qfFd

Yes, this includes abortions resulting from incest, rape, in which the woman’s life is in jeopardy, or when the fetus has no chance of survival.

But Republican senators aren’t tweeting about either that grim irony or the fact that, on his way from the march, they would have passed a long line of furloughed federal workers waiting for food.