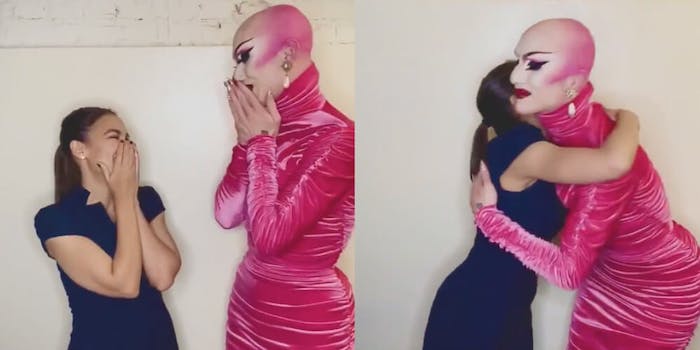 It turned one into a Holocaust supporter, apparently.

Conservative YouTuber Dave Rubin reposted a video of the endearing interaction between Ocasio-Cortez and Velour with the caption, “Your Democratic 2024 ticket, ladies and gentlemen and other…” The post antagonized conservative rage.

Your Democratic 2024 ticket, ladies and gentlemen and other…pic.twitter.com/DIE6z6qXMd

While some fuming conservatives bashed on Ocasio-Cortez, others took offense to Velour’s gender fluidity. One troll, in particular, claimed that WWII soldiers would submit to Nazi Germany if they saw the support the gender-fluid community has present day. Then, he pushed it even further by saying he would stand with the Nazis over an Ocasio-Cortez-Velour 2024 ticket in response to Rubin’s tweet.

“American soldiers in WW2 would have surrendered and defected en masse to the Nazis had they been able to see what they were really fighting for,” Twitter user @SubmitToGravity wrote. “Give me a choice between the kind of insanity we see pictured and the Nazis, I’m taking the Nazis, without blinking an eye.”

“Has the sight of a man in women’s clothing ever made you so mad that it made you support the Holocaust,” Twitter user @classiclib3ral wrote.

Has the sight of a man in women's clothing ever made you so mad that it made you support the Holocaust pic.twitter.com/h49hyZfZM4

According to Out, Ocasio-Cortez met Velour backstage at Velour’s Washington, D.C. show. Ocasio-Cortez is a superfan of RuPaul’s Drag Race, a reality competition show in search of America’s next big drag star. Velour was crowned the winner of the series’ ninth season.

“I thought it was amazing, it was incredible, it was fabulous,” Ocasio-Cortez said in the video. “I’m like that Lady Gaga moment where she’s like, ‘stunning, amazing, impeccable, genius.’”