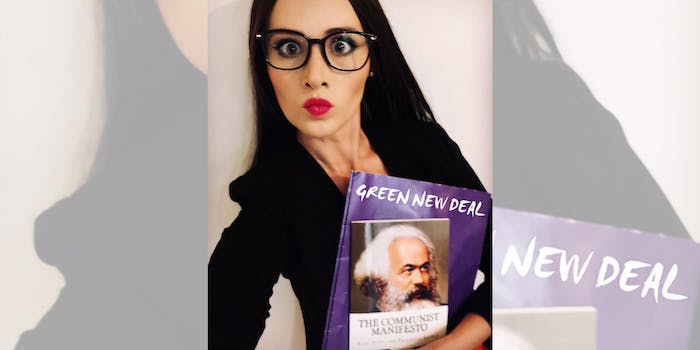 Tomi Lahren dresses up as Alexandria Ocasio-Cortez for Halloween

'I decided to dress up as the person who scares me most.'

Tomi Lahren decided to dress as “the person who scares me most” for Halloween this year, and perhaps predictably landed on Rep. Alexandria Ocasio-Cortez (D-N.Y.).

Lahren, the Fox News pundit who launched a patriotic-themed clothing line that was not manufactured in America, tweeted out her costume and posted it on Instagram on Thursday.

“I decided to dress up as the person who scares me most. The Democratic Dimwit Darling, socialist-loving, freedom-hating, former bartender herself @AOC,” Lahren wrote on Twitter.

“I’m not afraid of ghouls, ghosts, zombies or political incorrectness. I am far more terrified AOC was actually elected to the United States Congress. Talk about a haunted House,” she wrote, adding the hashtags #TeamTomi, #halloween, #AOC, and #SocialismKills.

I decided to dress up as the person who scares me most. The Democratic Dimwit Darling, socialist-loving, freedom-hating, former bartender herself @AOC pic.twitter.com/PAEK8LkfvI

While Lahren tagged Ocasio-Cortez on Twitter, the New York lawmaker had not yet responded as of Thursday afternoon.

While Ocasio-Cortez hasn’t commented on the outfit, a ton of other people on Twitter did–and they aren’t fans.

“Halloween has been ruined,” as one user declared.

Halloween has been ruined. https://t.co/RCC7vKCuve

hate is a very unattractive look on people https://t.co/fyeNUZZ9bY

When your entire life is a desperate cry for attention … https://t.co/h31Cu87CwJ

Imagine allowing someone to occupy this much space in your head. Imagine. https://t.co/SSLjewpajS

Haven't you heard? Imitation is the sincerest form of flattery. Although in your case, sincerity is not something you understand. https://t.co/WIW0OJPQWh

This is the closest you’ll ever come to Congress, you insipid strip mall Barbie. https://t.co/rld4picWEB