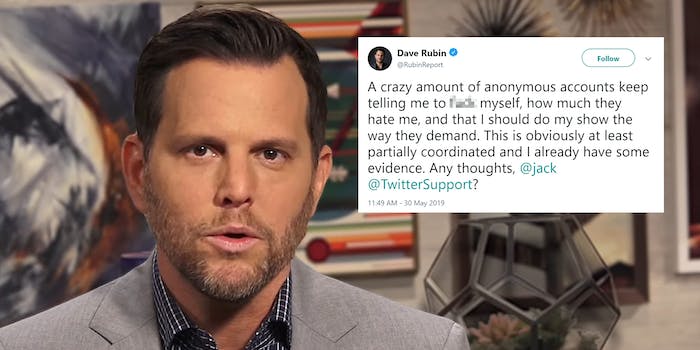 Dave Rubin is now starring in his very own self-fulfilling prophecy.

Earlier today, the talk show host tweeted a very specific complaint: “A crazy amount of anonymous accounts keep telling me to fuck myself, how much they hate me, and that I should do my show the way they demand. This is obviously at least partially coordinated and I already have some evidence. Any thoughts, @jack @TwitterSupport?”

A crazy amount of anonymous accounts keep telling me to fuck myself, how much they hate me, and that I should do my show the way they demand. This is obviously at least partially coordinated and I already have some evidence. Any thoughts, @jack @TwitterSupport?

The fun began immediately. Rubin, a classical liberal (code for a conservative straight outta the 19th century) and member of the incredibly serious and definitely-not-at-all ridiculous Intellectual Dark Web, soon found himself on the receiving end of a very many ‘go fuck yourself’ tweets.

More than a few pointed out the irony that someone who rails about censorship and free speech all the live long day would run and tell that people are hurting him with their word daggers. Free speech activist Nathan Bernard was among them, giving Rubin a nice dragging by tweeting, “Dave Rubin hates free speech.”

Maybe Rubin needs one of those trigger warnings.

The comment thread was generously sprinkled with references to @dril tweets, with at least one person asking ironically if it was actually a dril tweet.

The award for best dril reference was actually a tie.

mods!! mods! one of those obscene low follower count boys stole a lick from the delicious lolly that Father bought me!! ah! how dreadful !

Several people pointed out the distinct possibility that all the ‘fuck yourself’ tweets were not evidence of a coordinated bot attack, as Rubin seems to imply, but that people just don’t like him and think he should go fuck himself.

“I think the hate is more organic than you might want to believe,” one commented.

Deadspin’s David Roth served up a tasty snack of snark, writing, “I have studied this data and there appears to be a pattern: people find out about your show and you and then decide that they don’t care for either. We need to figure out how high up this goes.”

The sarcasm directed at the guy who pals around with Ben Shapiro (whom he un-ironically calls a “thought leader” on his website); is in cahoots with beanie cap spokesperson (we assume) Tim Pool; and is currently touring with the maestro of meat and casual sexism Jordan Peterson was genuinely next-level.

“I blare Godsmack on my stereo at full volume at 4am every morning. On an unrelated note, my neighbors all seem to be mad at me. I have evidence this is a coordinated attack.”

Hey @RubinReport, I found a post that appears to be an attempt to coordinate such a barrage as the one you described. Check it out:https://t.co/KlZ8jqX2ad

Dave, I can relate. I went to a local park the other night and played some Nazi propaganda films while nodding along in agreement and just like that, BOOM, everyone in the park engaged in a coordinated attack against me.

But what’s a Rubin to do when the internet gets him down? Well, he might wanna take a healthy dose of his own advice: “Twitter is not real life.”

It’s right there in his bio, so it shouldn’t be hard to remember.