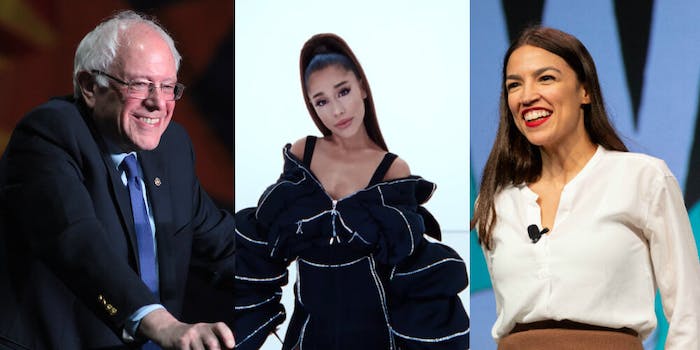 Ariana Grande, AOC, and Bernie Sanders are vibin’ on Twitter

Grande tweeted, 'baby how u feelin.' And Sanders responded.

It started Friday afternoon when Grande tweeted, “baby how u feelin” in reference to her “Good As Hell” collab with Lizzo. Sanders, always on the grind to rally young voters, quoted Grande’s tweet and said, “Ready to fight for Medicare for All.”

Ready to fight for Medicare for All. https://t.co/tltURZpb6a

Ocasio-Cortez, who is known for her stellar use of social media to connect with voters, responded with a short playlist of Grande’s music to represent progressive policies Ocasio-Cortez and Sanders are fighting for. “Thank u, next” is passing medicare for all, “God is a Woman” is repealing the Hyde Amendment, “Break Free” is forgiving student loans, and “Be Alright” is passing a Green New Deal. To underscore her excitement, Grande responded “screaming screaming.”

Ocasio-Cortez, who is the youngest woman ever elected to Congress, recently endorsed Sanders for president. Though she has faced backlash for not endorsing a female or minority candidate, Ocasio-Cortez says she chose Sanders because he inspired her to run for Congress in the first place.

“The only reason that I had any hope in launching a long-shot campaign for Congress is because Bernie Sanders proved that you can run a grassroots campaign and win in an America where we almost thought it was impossible,” Ocasio-Cortez told voters.

Though the effect Ocasio-Cortez’s endorsement will have on Sanders’ poll numbers is unknown, her endorsement and the social media exposure that comes with it will surely energize young voters.